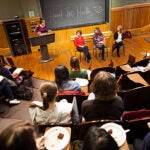 A healthy replacement for dieting

Harvard stem cell scientists have discovered that a recently approved medication for epilepsy might be a meaningful treatment for amyotrophic lateral sclerosis (ALS), also known as Lou Gehrig’s disease, a uniformly fatal neurodegenerative disorder. The researchers are now collaborating with Massachusetts General Hospital (MGH) to design an initial clinical trial testing the safety of the treatment in ALS patients.

The investigators all caution that a great deal of work needs to be done to assure the safety and efficacy of the treatment in ALS patients before physicians should start offering it.

The work, laid out in two related advance online publications in April by Cell Stem Cell and Cell Reports, is the long-term fruit of studies by Harvard Stem Cell Institute (HSCI) principal faculty member Kevin Eggan, who in a 2008 Science paper first raised the possibility of using ALS patient-derived stem cells to better understand the disease and identify therapeutic targets for new drugs.

Now Eggan and HSCI colleague Clifford Woolf have found that the many independent mutations that cause ALS may be linked by their ability to trigger abnormally high activity in motor neurons. Using neurons derived from stem cells made from ALS patient skin cells, the two research teams conducted clinical trials of the anti-epilepsy medication on neurons in laboratory dishes, finding that it reduced the cells’ hyperexcitability.

ALS is a devastating and currently untreatable degradation of motor neurons, the long nerve cells that connect the spinal cord to the muscles of the body. While several potential treatments have looked promising in mice, all proved disappointing in the clinic.

“The big problem in ALS is that there are more than 100 mutations in dozens of genes that all cause the disease, but almost all of the therapeutics that have gone forward in the clinic have done so for just one of those mutations, SOD1, which almost everyone studies in mice,” said Eggan, a professor in Harvard’s Department of Stem Cell and Regenerative Biology.

“And so,” he continued, “the key question that we really wanted to address was: Are clinical efforts failing because the mouse is taking us on a wild goose chase, or is it simply that people haven’t had the opportunity to pretest whether their ideas are true across lots of forms of ALS?”

In the Cell Stem Cell study, Eggan and postdoctoral fellow Evangelos Kiskinis led an effort to make stem cell lines from two women with ALS who have SOD1 mutations in order to compare human biology and mouse biology. Using a technology called RNA sequencing to look at how the mutation changed gene expression in these lines, the researchers then traced the changes to their impact on biological pathways.

“We found that the mutation makes changes in the motor neurons, which aren’t so different from the changes that you see in the mice,” Eggan said. “I think our paper says that while there are definitely some human-specific biology, the mice weren’t totally misleading.”

Eggan’s lab then created more stem cell-derived motor neurons from patients with another form of ALS, as well as people without the disease, to see what changes occurred in ALS cells and if these were present across independent genetic mutations.

The surprising result, described in the Cell Reports study, was that the motor neurons that possessed ALS mutations had a sporadic increase in neuron firing, while the healthy neurons were quiet unless stimulated in some way.

The ALS hyperexcitability was further examined by Woolf’s team, led by Harvard Medical School neurologist Brian Wainger. Working with Eggan and Kiskinis, they found a cyclical relationship between the increased neuron activity and abnormal protein folding. In the two papers, they describe how the overexcitable ALS neurons generate more abnormally folded proteins, further increasing their excitability. The strain of this cycle seems to put the neurons in a vulnerable state, where they are more likely to die.

“The convergence on a single mechanism offered a very attractive place to intervene therapeutically,” said Woolf, a Harvard Medical School professor in neurology and neurobiology and director of the neurology center at Children’s Hospital Boston, who also co-leads HSCI’s Nervous System Diseases Program.

“It looked like there’s a deficit in potassium channels in the ALS motor neurons, and that led us to then test whether drugs that open the potassium channels may reduce this hyperexcitability. And indeed that’s exactly what we found,” he said. “We found that retigabine, which has recently been approved as an anticonvulsive, normalized this activity. So now we can formally go from the dish to the patient and actually explore whether the drug might have any beneficial effect.”

MGH neurologist Merit Cudkowicz, with Wainger, will be running the clinical trials, which will first test for side effects in ALS patients treated with the drug. The researchers caution against calling this work a breakthrough or having doctors prescribe this drug to patients immediately. Clinical trials are necessary to determine whether there are any unusual interactions between the drug and ALS, since having a particular disease can make someone more sensitive to certain types of drugs.

“The whole intact nervous system is more complicated than the cells that we have in the dish at the moment,” Eggan said. “And now the next step is to say whether or not the drug will be helpful in that context, and it’s too early to say for sure.”

The scientists credit emerging technologies and the unique collaboration between a stem cell lab and a neuron physiology lab as an essential part of making this research clinically relevant for ALS patients.

“I think it’s the beginning of a complete change in the way we do medicine for serious diseases like this,” Woolf said. “In a traditional clinical trial, you give the patient the placebo or an active ingredient to see the effects they have, and it’s over. Here we can take the same stem cell lines and have an infinite capacity to do clinical trials in a dish.”