Life, reflected in the dead 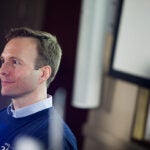 We tend their bodies to add meaning to our own days, author says

That was the simple yet profound question audience members were asked to grapple with Tuesday afternoon at a lecture hosted by the Radcliffe Institute for Advanced Study.

The answer depends less on religious or metaphysical viewpoints, said Thomas W. Laqueur, professor of history at the University of California, Berkeley, than on a primordial set of ethical obligations played out over thousands of years across countless cultures.

The story of why Westerners care for the dead in many ways begins with Diogenes the Cynic, who lived in the fourth century B.C. He said the dead should not be cared for at all, and wanted his own body tossed over the walls and “ostentatiously returned to nature.” In nature, the human body is nothing, and it makes no difference what we do with it, he claimed.

“Diogenes’ arguments had many admirers through the centuries, including, implausibly, St. Augustine,” Laqueur said. “But his answer remained culturally and emotionally impossible.”

Indeed, the history of much of human culture and thought can be written in our resistance to Diogenes, Laqueur said, “not because of particular beliefs, but because of a primal idolatry — the need to make something live out of something we know to be dead.”

We know the dead body to be just matter, so why is Diogenes’ answer so unsatisfying? One set of answers depends on the claim that we have a primal aversion to the uncared-for dead body, Laqueur said. Simply put, the dead body is dangerous.

Clergymen in the 18th century thought that “the dead naturally tend to destroy the life of others,” Laqueur said. “The natural spirit of life has an aversion to the dead body … which is why he simply can’t toss it away, but it must be put somewhere safely out of sight that is unlike the detritus of the stockyard.”

In the early 17th century, Hugo Grotius, the father of modern law, concluded that the denial of burial was a just cause of war. “The right to burial is common to all civilized nations, and it is evidence of our common nature of compassion, religion, and humanity,” he wrote.

Later, care for the dead became a sign of man’s emergence from the world of nature into the world of culture. The 20th century philosopher Hans-Georg Gadamer called it “the fundamental phenomenon of being human.”

But it was not only the repulsion from the dead body that drove Western culture to properly care for it. It was also an immense human need that the rituals of burial fulfilled.

Looking through an anthropological lens, “The dead do work for the living,” Laqueur said. “The dead are dead. But we need them to do the work that they do. We need them more than they need us.”

We have a primal need to endlessly invest a dead body with meaning, Laqueur said. “Through the dead, the human past speaks to us.”

But even Godwin — who was as close to an atheist as one could be in the late 18th century — tried to bridge the divide between the living and the dead with attention to the material body, Laqueur said.

“The corpse is the great paradigmatic reminder set for us by the system of the universe that we are of degraded nature, and humble origins, that we are mortal, and that there is an abyss between the living and the dead. We cast bodies back into the ground as a token of this truth, yet the corpse remains strangely still the person it was, lacking only what seems so little yet so great, the breath of life, the rosy you. The corpse and the person are not irrevocably sundered.”

Bridging the divide between the living and the dead continues to compel us to care for them. Laqueur ultimately places his beliefs in the camp of the art critic David Hickey, who wrote, “We are mortal creatures who miss our dead friends and thus can appreciate levitating tigers and portraits by Raphael for what they are: songs of mortality sung by the prisoners of time.”

“Largely beyond metaphysics, the dead body conjures with this sort of magic,” Laqueur said. “And from my modern secular perspective, it’s a magic we can still believe in.”

Much of Tuesday’s lecture was drawn from Thomas W. Laqueur’s forthcoming book, “The Work of the Dead,” both a social history of what people in the past did with their dead and a cultural history about what their actions and attitudes meant.