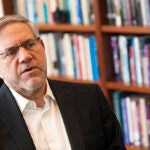 On the third floor of Cambridge Rindge and Latin School (CRLS), a student leaned forward and asked: Will the future of deep-sea technology be human or robotic?

More than 1,000 miles away, in the Gulf of Mexico, Bruce Strickrott stood next to the Alvin, the deep-sea research submersible, and answered simply: both.

Comparing human and robotic exploration was unfair, said Strickrott, the chief Alvin pilot with the Woods Hole Oceanographic Institution, because both have great value. But, he added, “Every time I’ve taken someone down in the submarine who’s only worked with [marine robotics], they always say, ‘I never knew it looked like that.’”

Rindge and Latin students in Cambridge were communicating with Harvard researchers and scientists who were in the Gulf conducting a “verification cruise” — the first of its kind — on the Alvin sub, which had undergone a comprehensive upgrade over the last three years to expand its capabilities.

Commissioned in 1964 as one of the world’s first deep-ocean submersibles, the vehicle had been out of service since December 2010. Having already completed more than 4,600 dives, Alvin’s upgrade now allows the sub to safely operate to more than 14,000 feet below the surface, 2,300 feet deeper than it could previously. Able to carry two scientists and a pilot on dives lasting up to 10 hours, the Alvin has located lost hydrogen bombs, explored hydrothermal vents, and surveyed the wreck of the RMS Titanic.

With its new upgrade, the sub now has “all the bells and whistles,” said Peter Girguis, a professor in Harvard’s Department of Organismic and Evolutionary Biology.  Girguis proposed the verification cruise, which was funded by the National Science Foundation. Joining forces with Paul McGuinness, the marine biology teacher at Rindge and Latin, Girguis gathered Alvin researchers, scientists, and crewmen to talk with the students about their work and discoveries, even sharing new images and videos not yet released to the public.

Speaking in an interview a week prior to the Gulf expedition, Girguis stressed that “we need to begin doing a better job of engaging students” in marine science. “By the time students go to college, many see some career paths as impractical. We want to show [them] that marine science has many viable career options, not just being a professor. We need ocean engineers, captains who can pilot the ships, researchers who work in fisheries. We want to give students an unprecedented opportunity to engage with the people who are doing those jobs.”

“The opportunity for all kinds of students to talk face-to-face to the people on a vessel like that, answering questions in the moment, is really valuable,” said Caspian Harding, a Rindge and Latin senior and an intern with the Girguis lab through the CRLS Marine Science Internship program at Harvard. “It shows you can be a pilot, an engineer, a videographer. All these options are open. It shows you really can pursue what you love.”

Responding to a student asking about “the next big questions” for marine science, Harvard graduate student and Girguis lab member Heather Olins said the possibilities were endless. “It’s a hard question to answer,” she said. “We know so little about the floor of the deep sea that all the questions are big questions.”

At the end of the day, “out here at sea, a lot of people pitch in to help,” Girguis said. “The fact is, it really takes a team of people working together to get things done.”

This collaboration is one of many between Harvard and the Rindge and Latin.  To learn more about the University’s partnerships with local schools, visit Harvard Community Connections on the Web.