In shared run, a sort of stand 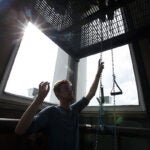 As Massachusetts and the nation remember the tragic events at last year’s Boston Marathon, Harvard runners are getting ready to move ahead the best way they know: together.

A group of chilly but eager marathoners gathered Friday in front of the John Harvard Statue for a 2-mile jog into Boston to pick up their official numbers.

Three weeks ago, Daniel Lieberman, a professor in human evolutionary biology, met Provost Alan M. Garber for their last long training run in preparation for the 26.2-mile race. The pair attacked Heartbreak Hill, a rolling section of the course that has long challenged even the most elite athletes.

“The way to heal this wound is to run it harder and faster and better than ever this year and not be deterred,” said Lieberman, who often runs alone during the week but connects with members of the Harvard community for longer training runs on weekends. “It doesn’t mean you don’t pretend it didn’t happen. That’s not only impossible, it’s unimaginable. So to be very mindful of it, thoughtful of it, emotional about it, but to overcome it.

“The marathon always is a celebration of the human body and the human spirit and perseverance and endurance,” he added. “The very idea of the marathon is about enduring. It’s about overcoming challenge.”

In preparing for the race, many runners relied on groups such as Harvard on the Move, which sponsors regular runs and walks for staff, students, and faculty, and the Harvard College Marathon Challenge (HCMC), an email listserv that connects athletes for training runs and helps raise money for various charities.

Many Harvard runners who took part in last year’s race said they were returning this year as a way both to honor those who died or were injured and to show support for the city of Boston. Then there are those who were ushered off the course last year, and are coming back to make that triumphant turn onto Boylston Street for the last dash across the giant yellow “finish” spelled on the pavement.

Todd Lubin ’15 had secured a number though HCMC and was running to support Phillips Brooks House. The first 16 miles were “absolutely amazing,” he recalled, but then some nagging injuries started to flare up. Lubin pressed on and was less than a mile from the finish when a wall of runners standing on the course stopped him cold.

“Nobody had any idea what was going on except that something happened at the finish.”

Lubin grabbed a cab back to Cambridge, where he had dinner with his family and a running partner and tried to make sense of the day’s events. In the weeks that followed, one thing became clear: He was going to run again. Like the thousands of marathoners who didn’t finish last year’s race, Lubin was invited by organizers to return.

“I absolutely wanted to run again, it was not a question. When it all settled, I felt very lucky to be given another chance to run again to show support for Boston.”

Garber recalled the festive mood a year ago as he headed off to the starting line on a bus packed with student athletes.

“We rode the bus to Hopkinton in high spirits. Many of the students were running their first marathon and there was such an air of excitement. As I crossed the finish line, I thought it was one of the most wonderful marathons I’d run, with perfect conditions and the runners and spectators in a great mood. But it wasn’t long before everything changed.”

Lieberman, who crossed the finish line 50 minutes before the attack, soon connected with Garber. They heard the bombs as they walked with their families through the Public Garden, but assumed they were cannon blasts in honor of Patriot’s Day. When they arrived in Harvard Square, they learned what had happened.

“My phone just went berserk,” said Lieberman, “and that was the end of my runner’s high.”

But in the hours and days that followed, the Harvard community joined people from all over the world in responding in inspiring ways. Garber recalled the students, staff, and alumni who helped close to 1,400 soon-to-be freshmen arriving for Visitas, an introduction to the Harvard experience, make alternate plans with the campus locked down amid the search for the suspected bombers. Days later, students in Cabot House filled in for dining hall employees so they could attend the funeral service for 29-year-old bombing victim Krystle Campbell, the daughter of a co-worker.

“We’re often focused on day-to day concerns — our work, our studies, our everyday frustrations and triumphs,” said Garber. “There are very positive events that bring us together as a community, like Commencement. But sometimes a disaster pulls us together. Although it is terrible in so many ways, it really brings out the true colors of the Harvard community.”

Garber, who was certain last year’s marathon would be his last, had no doubt about running one more time. “It really was going to be my last marathon. But after the bombing, like so many other people, I thought it was important to send a message by showing up this year.”

He said is looking forward to another bus ride with students out to the starting line. “I know that being with them will give me a huge boost.”

Shi has been part of the HCMC listserv since her freshman year. A member of the track team in high school, she turned to long-distance running at Harvard to help her cope with the stress of final exams. Connecting with fellow runners on the listserv motivates her to run, “even when I don’t want to.”

She expects an emotional day and a grueling test. And to complete the course, no matter how long it takes.

“I will just be happy if I finish.”

One Harvard runner’s finish last year was a show of exceptional bravery, and was honored as such on Friday. Serving as a guide for a blind runner, Everett Spain, an Army colonel and doctoral student at Harvard Business School, was 100 yards from the finish line when the bombs went off. Spain led his charge across the line and then rushed to help the wounded. He was awarded the Soldier’s Medal in a ceremony on Friday at HBS, the highest award for an act of valor in a noncombat situation.