In L.A., the watchword is Harvard 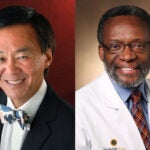 350 alumni, friends gather to probe the value, uses of creativity

More than 350 Harvard alumni and friends gathered in Los Angeles last month to network with peers, hear from Harvard President Drew Faust and Faculty of Arts and Sciences (FAS) Dean Michael D. Smith, and take part in discussions on why creativity is so essential to living our best lives.

Nearly a third of Harvard’s alumni on the West Coast settle in Los Angeles. Many of them came to the five-story Dorothy Chandler Pavilion for a taste of Cambridge during “Harvard in Los Angeles,” a daylong program presented by the Harvard Alumni Association, the Harvard College Fund, and the Harvard Club of Southern California.

Faust opened the “Your Harvard” luncheon on March 8 by giving a campaign update and sharing part of her vision for the University’s future. The event was the second in the “Your Harvard” series, with additional events planned in other cities around the world throughout The Harvard Campaign.

Faust began by recalling a story an alumnus had shared with her about a freshman class project. It was a screenplay that he worried was going nowhere and would surely earn him an F. Instead, his professor, Anthony Kubiak, encouraged him to keep working on it. The alumnus was Matt Damon, and the screenplay an early iteration of what became “Good Will Hunting.”

“Over and over again, across the country and around the world, I’ve heard stories from students and alumni who tell me that Harvard reached inside of them and pulled forth who they were capable of being, what they were capable of achieving,” said Faust. “The University invites and challenges each of us to write our own part, to compose a unique story, to examine and define our lives even as we explore their meaning.”

During her address, Faust imparted her ambitions for the University through The Harvard Campaign. “Seizing that impatient future is the goal of this campaign,” she said. “The future we face together is one in which knowledge will be the most important currency. Harvard must be at the forefront of creating knowledge, of integrating knowledge across fields, and of deploying knowledge in service to the world.”

The afternoon portion of the program — part of the fourth annual Harvard College ReConnect, a gathering for alumni and friends from the Western states — featured stories of discovery at Harvard, including a cross-disciplinary exploration of ideas, creativity, and innovations at the heart of the FAS.

“Creative thinking and new ideas have always fueled excellence at Harvard, advancing teaching, learning, and research,” said Smith, who shared stories of student innovation throughout the College. “Universities should be institutions that nurture and celebrate creativity — creativity of all kinds — from engineering to the performing arts. And no place does it better or more expansively than Harvard.”

Peter Galison, Joseph Pellegrino University Professor, shared a slice of his HarvardX course “The Einstein Revolution” and a discussion of how coordinating clocks, using Einstein’s work, has advanced new understandings of space and time. Discussing the close connections between the humanities and sciences, Galison said, “I want my students to know that the same analysis they use to unpack a poem or grasp economics can be applied to understanding physics.”

Jennifer Roberts, the Elizabeth Cary Agassiz Professor of the Humanities, discussed how the history of map projections influences our world view, from the technology we use to our perception of cultural differences. “Why are the maps we use so powerful if they are so distorted?” asked Roberts, who said she wants to challenge her students’ perspectives of the world so they can experience “thrilling and disorienting ways of seeing anew.”

Beth Altringer, lecturer on innovation and design, spoke about empowering students in her class “The Innovators’ Practice” to embrace leadership. Students frequently underestimate their own leadership capabilities or over-promise and then under-deliver. Together, she helps them to evaluate their performance. “These are hard conversations, but if they have them now, when they are young, these can be powerful experiences,” said Altringer, noting that 80 percent of her students continue their projects after the class is over.

Dan Nocera, Patterson Rockwood Professor of Energy, focused on the importance of taking care of the poor in solving the world’s impending energy crisis. Nocera has built an “artificial leaf” that emulates photosynthesis, with the goal of creating sources of energy. By uncovering the “guarded secrets of plants” — the process of taking sunlight and converting it into a moving charge — Nocera believes that solar fuel can meet growing demand around the world. “The job of the sciences is to solve this problem. It is a big job and perfect for Harvard,” he said.

Creativity at “The Simpsons”

Harvard alumni have been at the heart of “The Simpsons” since the animated television comedy first aired in 1989. Key members of the show’s creative team talked about how Harvard prepared them for their roles on the iconic sitcom. The alumni panel featured producer and writer Rich Appel, ’85, J.D. ’88; executive producer Al Jean ’81; Oscar-nominated animation director Lauren MacMullan ’86; and producer and writer Jeff Martin ’82, P. ’14. The panel was moderated by Susanne Daniels ’87, president of programming for MTV.

Many of the panelists cited the influence of their peers at Harvard. Jean called his roommate Mike Reiss ’81, “one of the funniest people I’d ever met.” Longtime writing partners, Jean and Reiss worked together on “The Simpsons” and co-created “The Critic,” among other shared credits.

Martin recalled joining the Harvard Lampoon as a freshman, likening it to falling in love. “The Lampoon was like our Beatles in Hamburg. It was our 10,000 hours of practice. I made most of my best friends there,” he said.

Appel agreed. “Everyone always said that when you are at Harvard, it is everyone around you,” he said. “My experience at the Lampoon really mirrored the work I do in television now. It is very collaborative, and we will do anything to make each other laugh. It is very democratic, just like the Lampoon. The best things I ever did were there.”

The importance of collaboration was a common theme. “It’s the biggest lie that something is successful because of one person,” said Jean. “It is always a group of eight or more.” The group explained the multiple collaborations it takes to get one episode to air, a process that begins with the writing but continues to develop through animation.

MacMullan talked about the weight she feels when she gets the script and recordings featuring the best voice actors in the business. “There are thousands of ways to ruin a joke,” she said. “I think of myself as a joke shepherd.”

And the script can’t be changed when it gets to the animation stage, Appel noted. “As long as the characters blink once, you can’t rewrite a joke,” he said.

The panelists shared their favorite episodes and noted how Harvard has often found its way into the script. “We use everything that we know from Harvard and our lives,” said Martin. “If we had experienced something, it will creep into ‘The Simpsons.’”

Q&A WITH Al JEAN, EXECUTIVE PRODUCER OF “THE SIMPSONS”

GAZETTE: You were a math concentrator at Harvard. Could you have predicted this?

JEAN: Someone I knew in college, Conan O’Brien ’85, has been a talk-show host for 25 years. It’s the most bizarre set of things that have happened. I’m always just pinching myself. It’s crazy.

GAZETTE: Do you think L.A. is very different from Cambridge?

JEAN: Well, the people I see here are the people I knew from college. It’s very similar in terms of who I talk to and how my day goes. You know, L.A. — Woody Allen will make jokes about it being uncultured — but there a lot of really smart and really funny people here. The writers here are amazing people.

GAZETTE: You talked a lot about collaboration being the root of creativity. Did you learn that at Harvard?

JEAN: The Lampoon was a great learning experience on how to work with other writers, how to be less defensive about your work. And those are extremely valuable lessons for someone going into television.

GAZETTE: I read once that you really like writing for [“The Simpsons” character] Lisa? Is she going to get into Harvard?

JEAN: Well, she is the most intelligent character. She’ll want to, but I don’t know. You know, she’s someone who gets the pony and then gets it taken away. On the other hand, she’s going to be president. So that’s a happy ending.

GAZETTE: There’s a rumor that a “Simpsons” character will die off next season. Care to tell us who it’s going to be?

JEAN: You can figure it out and use the following clues. The actor who plays the character won an Emmy for playing a character. We’ve said it won’t be a character who has only appeared once, and you can probably guess which characters we would not get rid of because they are too valuable. I’ve seen it exactly figured out, and so if someone would just send me the answer to “True Detective” …

GAZETTE: Does your daughter watch the show?

JEAN: Since she was 3. She discusses the writing of the characters and loves to draw them.

GAZETTE: What do you think she wants to be when she grows up?

JEAN: I hope she goes to Harvard. She’s extremely bright. She could be a writer.