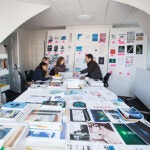 Physicists design quantum triggers that can be activated by a photon

Harvard researchers have succeeded in creating quantum switches that can be turned on and off using a single photon, a technological achievement that could pave the way for creating highly secure quantum networks.

Built from single atoms, the first-of-their-kind switches could one day be networked via fiber-optic cables to form the backbone of a “quantum Internet” that allows for perfectly secure communications, said Professor of Physics Mikhail Lukin, who, together with Professor Vladan Vuletic of MIT, led a team consisting of graduate students Jeff Thompson and Lee Liu and postdoctoral fellows Tobias Tiecke and Nathalie de Leon to construct the new system. Their research is detailed in a recently published paper in the journal Nature.

“From a technical standpoint, it’s a remarkable accomplishment,” Lukin said of the advance. “Conceptually, the idea is very simple: Push the conventional light switch to its ultimate limit. What we’ve done here is to use a single atom as a switch that, depending on its state, can open or close the flow of photons … and it can be turned on and off using a single photon.”

Though the switches could be used to build a quantum computer, Lukin said it’s unlikely the technology will show up in the average desktop computer.

Where it will be used, he said, is in creating fiber-optical networks that use quantum cryptography, a method for encrypting communications using the laws of quantum mechanics to allow for perfectly secure information exchanges. Such systems make it impossible to intercept and read messages sent over a network, because the very act of measuring a quantum object changes it, leaving behind telltale signs of the spying.

“It’s unlikely everyone would need this type of technology,” he said. “But there are some realistic applications that could someday have transformative impact on our society. At present, we are limited to using quantum cryptography over relatively short distances — tens of kilometers. Based on the new advance, we may eventually be able to extend the range of quantum cryptography to thousands of kilometers.”

Importantly, Tiecke said, their system is highly scalable, and could one day allow for the fabrication of thousands of such switches in a single device.

“What we’ve really done is take ideas that people have been exploring, and still are exploring, in macroscopic systems where the light bounces back and forth on two centimeter-size mirrors to interact with an atom. We’ve taken that and shrunk it down,” said Thompson. “For two decades, researchers have been working on coupling two or three of these macroscopic systems and [creating] a simple network. But it’s very easy for us to create three or four, or 10,000 of these optical circuits. What the present paper shows is, at least technologically, the way forward.”

That is one way, Lukin believes, for quantum systems to make the same transition that conventional computers made decades ago.

“But it’s very clear, if we want to scale these systems up, we have to think about using integrated circuits,” he continued. “What Jeff and Tobias have done is create a hybrid system. We take atoms in vacuum chambers and combine them with integrated circuits.”

Though fabricated in a way similar to how traditional computer chips are made, the integrated circuits built by Thompson and Tiecke don’t run on electricity, but on light.

The chips use nanophotonic technology — essentially the ability to create “wiring” that can channel and control the pathway of light — to build optical circuits that can then be connected to fiber optic cables.

After placing the optical circuits in a vacuum chamber, researchers used “optical tweezers” — precisely focused lasers — to capture a single atom and cool it to a fraction above absolute zero. They then move the atom to within a few hundred nanometers of the chip.

Simply bringing the two parts together, however, isn’t enough. To create quantum switches that one day may be at the heart of quantum networks, the researchers bombard the atom with microwaves and lasers, causing it to enter a quantum superposition state, meaning it can occupy multiple quantum states, corresponding to on and off states of the switch, at once.

“For this to work, the atom switch must be prepared in this special superposition state,” Lukin explained. “This superposition state is extremely fragile — so fragile that when a single photon hits it, it actually changes its phase. That change of phase is what allows it to act like a valve, and be turned on or off.”

While it’s unlikely the switches will become standard equipment for personal computers, Lukin said, they could appear in prototype quantum networks in as little as a decade.

“There are other systems that are more sophisticated in terms of building a quantum computer,” Thompson said. “But the key advantage to what’s demonstrated in this paper is the single-atom switch is very tightly coupled to light, and specifically to light in optical fibers.”