Digital record of a stand against chaos 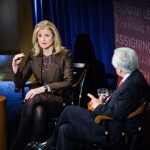 The bombings at last year’s Boston Marathon turned a celebration of the human body and spirit into a day of bloodshed, fear, and mourning. Three people died in the explosions and 16 of the more than 260 injured lost limbs. Now, a year later, as the city remembers the tragedy, a Harvard initiative is telling the story of the doctors, nurses, and emergency responders who saved countless lives. It is also chronicling the days and months that followed and the spirit that helped the city recover and healed both bodies and minds.

“Strong Medicine,” organized by Countway Library’s Center for the History of Medicine, is a digital archive of stories, photographs, oral histories, and other media documenting the medical community’s response to the crisis. Developed in collaboration with Our Marathon at Northeastern University, the archive is an effort to build a permanent record for future researchers and historians.

“This is a unique moment. People’s experiences are so vivid and strong, the medical community was so engaged with the public, and was so committed,” said Kathryn Hammond Baker, deputy director of the Center for the History of Medicine. The archive, which encourages self-submissions of materials via its website, is an opportunity “for the public to really get a glimpse into what medicine is on the ground floor when it’s all happening.”

Experts agree that many lives were saved last April 15 thanks to the courage and focus shown by responders on site and the preparedness of local hospitals. At Massachusetts General Hospital, a well-crafted disaster plan was in motion before the first of several severely injured patients arrived.

In one of the archive’s many interviews with members of the local medical community, Alasdair Conn, then the chief of the department of emergency medicine at MGH, details the hospital’s response and explains how an alert system notified approximately 1,000 people connected to the hospital about the bombings. As part of the MGH plan, staff from other departments helped clear the emergency room of patients, freeing up beds for bombing victims. Conn also recounts how doctors and nurses calmly came together to save lives.

“There was no screaming, there was no yelling, everybody was just doing their jobs,” Conn says, remembering work on three patients with traumatic amputations.

One lesson learned during the bombings was the power of social media. Before the hospital had received confirmation of the attack, an anesthesiologist saw a tweet about an explosion at the finish line.

“You’re not going to bring in 1,000 people on the basis of one, unsubordinated tweet,” says Conn, who is now chief of emergency medicine emeritus. “But we are going to say, ‘Something’s going on and we need to at least begin to alert people and set up the contingency plan.’”

Later in the interview, Conn, who is part of the joint committee of law enforcement, emergency services, and medical professionals developing a national policy aimed at enhancing survivability from mass casualty incidents, reflects on the changing nature of emergency medicine.

“I never thought, going to medical school, I would be dealing with how to manage a multiple-casualty incident or multiple shooting. But it’s a reality now. And we have to be able to face that.”

While some recollections are more clinical than others, said Joan Ilacqua, the archive’s project coordinator, most of the interviewees remember an immediate sense of shock, followed by a need to “get down to business.”

Many, she said, reflect on “a balance between your personal feelings and thoughts and what you’ve been trained to do.”

In addition to the emergency response, the archive captures the remarkable emotional support the community showed over the ensuing weeks and months. Among the materials are items sent to Brigham and Women’s Hospital — cards from well-wishers, messages of healing and support written on colorful paper cranes, and a red, white, and blue blanket with an attached note, “This blanket was handmade for you with thoughts of peace, love, hope, and strength.”

Many of the get-well cards were from children, said Ilacqua, who is compiling the archive with help from three grad students from Harvard’s History of Science Department: Emily Harrison, Miriam Rich, and Jacob Moses. The notes, some with the telltale stick figures in a young hand, convey simple yet powerful messages.

“To see that response from children … is especially striking,” said Ilacqua. “They are trying to comfort you in the way that they know how.”

One letter is particularly moving: a note from a 10-year-old who lost a leg to cancer, whose father’s words after the surgery were, “You can’t direct the wind, but you can always adjust your sails.”

“Since then, I have been trying hard to adjust my sails in this new breeze. Life isn’t about waiting for the storm to pass, it’s about learning to dance in the rain,” the letter continues. “I am still working on walking, then I will run, and just wait, soon I will be dancing again. And, SO WILL YOU!”

Organizers hope people will continue to submit material to the archive in the coming weeks and months.

“It’s a matter of convincing people that their individual stories are relevant and important in the personal and unique ways in which they experienced the Boston Marathon bombing,” said Ilacqua.