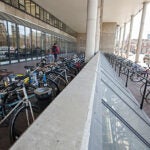 Harvard moves beyond a day and into ‘Earth Month’

When Peter K. Bol was in college, a revolution halfway around the world changed his life.

In 1966, Bol began to study modern China — the same year that the Cultural Revolution occurred. “All of a sudden, China went from being a very interesting and promising place to a very awful place. A place where people killed one another, where there was a cult of personality,” said Bol, Harvard’s vice provost for advances in learning and the Charles H. Carswell Professor of East Asian Languages and Civilizations, speaking at the Harvard Allston Education Portal (Ed Portal) earlier this month.

Choosing to focus on China’s history, Bol found a wealth of material that opened his eyes to the very foundations of the country. Among them were myths and legends, such as the “timeless Chinese love story” known simply as “Ying-Ying’s story.”

The love story between Ying-Ying, a young Chinese girl, and Zhang, a man who “held steadfastly to his personal principles,” dates to the Tang dynasty, about 600-900 A.D. In some ways, it is a tale as old as time — except that these star-crossed lovers do not elope, marry, or live happily ever after. Instead, after a tempestuous secret romance, they live moderately ever after, marrying other spouses and never seeing one another again.

The story, Bol said, highlighted the conflict “between desire and proper life: The two can’t mix. If you feel too much desire, it can’t be good. That comes from the Buddhist unease of emotion, its unease with desire.”

Centuries later, he noted, the story’s ending was altered, allowing the characters to marry and live their lives together and marking a shift toward modern love. The new ending, Bol said, emphasized that emotions were “not a danger. Emotional involvement with a person is necessary — in fact, it was [now seen] as the key to a moral society.”

Bol spoke to more than 50 members of the Greater Allston-Brighton community as part of HarvardX for Allston, a new educational initiative stemming from HarvardX and run in partnership with the Ed Portal. HarvardX for Allston will bring HarvardX content to the community by offering programs that integrate the latest in virtual education technologies with opportunities for face-to-face interactions and discussion.

In introducing Bol, Robert A. Lue, professor of the practice of molecular and cellular biology, faculty director of the Ed Portal, and faculty director of HarvardX, said that Bol’s ChinaX course — which he teaches with William Kirby, the Spangler Family Professor of Business Administration and T.M. Chang Professor of China Studies — was “designed to harness technology and the power of the Internet to promote teaching and learning in new and highly creative ways.”

The EdX platform, created in 2012 by Harvard and MIT, now has more than 4 million people registered worldwide. Of those, 1.2 million are registered for HarvardX courses and modules.

“We can use online learning content to bring individuals together,” Lue said. “To bring people from all over the world, live, into Allston. We have an opportunity to broaden the community in Allston, and also to bring Allston to the world as well.”

The Ed Portal serves as a physical gathering place to facilitate in-person programs, study groups, lectures, and discussion forums among the community and Harvard faculty, students, and staff.  Built around HarvardX courses and modules, programs will range from introductory-level topics designed for individuals with limited technical skills, to more in-depth programs for learners immersed in HarvardX courses.

Bernard Ho attended the Ed Portal talk and is also enrolled in the ChinaX course. He said that Bol’s course and the lecture in Allston have opened his eyes to the central philosophies of China, which have “been around for 3,000 years” and successfully stood the test of time.

“I imagine historians look at things much differently than modern people,” he said. “But looking at [China’s history] from scholastic point of view, having a historian tell the story … you learn so much more.”