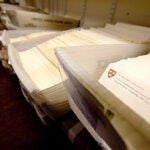 Morgan Chu, J.D.’76, an intellectual property lawyer and partner at Irell & Manella LLP in Los Angeles, has been named president of the Board of Overseers for 2014-15.

“Harvard is fortunate year after year to have such accomplished and devoted alumni, with helpfully complementary perspectives, provide leadership on the Board of Overseers,” said Harvard President Drew Faust.  “Along with so many of their colleagues, Morgan Chu and Walter Clair embody the board’s constant concern for understanding what helps Harvard thrive, challenging us to innovate and do still better, and encouraging us to think across traditional boundaries to see the University as a whole.”

Chu and Clair will be serving the final year of their six-year Overseer terms. They will assume their new roles following Commencement this spring, succeeding David W. Oxtoby ’72, president of Pomona College in Claremont, Calif., and Lynn Chang ’75, a Boston-area concert violinist and violin professor.

Chu is regarded as one of the nation’s pre-eminent intellectual-property lawyers. In 2010, the National Law Journal named him one of the decade’s 40 most influential lawyers, and the same publication recognized him as one of the top 10 trial lawyers in the nation. He was selected as Outstanding Intellectual Property Lawyer in the United States for the first Chambers Awards for Excellence, given in 2006. He started his career at Irell & Manella LLP in 1977, has been a partner since 1982, and served two terms as the firm’s co-managing partner from 1997 to 2003.

Chu’s parents emigrated from China during World War II. He dropped out of high school, but later talked his way into college, and by age 25 earned five degrees, a B.A., M.A., and Ph.D. from the University of California, Los Angeles (UCLA); an M.S.L. from Yale University; and a J.D. from Harvard Law School (HLS). Last May, a gift from Chu and his wife, Helen, established the HLS dean’s professorship in perpetuity.

In 2007, Chu received the UCLA Medal, the highest honor bestowed by the university.  UCLA recognized Chu’s role as a founder of the Asian American Studies Center when he was a student and his “groundbreaking approach to intellectual property.”  Chu’s pro bono work has included a successful landmark six-year fight for a death-row inmate. Chu is also the longest-serving member of the Board of Directors of Public Counsel, the nation’s largest pro bono law firm.

A Harvard Overseer since 2009, Chu serves as chair of the board’s committee on social sciences, as well as both the executive committee and the committee on Schools, the College, and continuing education. He also serves on numerous visiting committees, including those for the African and African American Studies Department, Department of Economics, Harvard Business School, Harvard Law School, and Harvard Medical School and the School of Dental Medicine.

Chu’s family members are also noteworthy. His brother, Steven, Harvard’s principal speaker at Commencement in 2009, won the Nobel Prize for physics in 1997 and was President Obama’s energy secretary.  His other brother, Gilbert, an M.D. and Ph.D., is a 1980 Harvard Medical School graduate and a professor of medicine and biochemistry at Stanford Medical School.

Clair, a cardiologist, is a nationally recognized specialist in arrhythmias, syncope, palpitations, sudden cardiac death, and pacemakers and defibrillators. Like Chu, he became an Overseer in 2009.

Previously, Clair was an elected director of the Harvard Alumni Association from 2002 to 2005 and chairman of the HAA’s awards committee from 2005 to 2007. His commitment to Harvard extends to his home state of Tennessee, where he is part of the Harvard Club of Middle Tennessee and its applicant interview committee.

Clair was given a scholarship to St. Mark’s School in Southborough, Mass., after being accepted into the program A Better Chance. He has served on the St. Mark’s Board of Trustees and was given its Distinguished Alumnus Award in 2013.

At Harvard, he was a pre-med adviser in Leverett House.

He currently mentors through the 100 Black Men of Middle Tennessee, which provides resources to further the academic and social development of students in Middle Tennessee schools, and has served on the admissions committee of Vanderbilt’s medical school.

In addition to earning degrees from Harvard College, Harvard Medical School, and the Harvard School of Public Health, Clair was an intern, resident, and primary-care chief resident at Brigham and Women’s Hospital from 1981 to 1984.

As an Overseer, he chairs the committee on Schools, the College, and continuing education and serves as well on both the committee on natural and applied sciences and the governing boards’ joint committee on alumni affairs and development.  He also serves on the visiting committees to the Psychology Department, the Medical School and School of Dental Medicine, and the School of Public Health.

At Vanderbilt University School of Medicine, Clair is an associate professor of medicine and medical director of cardiac electrophysiology. There he received Cardiology Faculty Teaching Awards in 2007 and 2008 and the Levi Watkins Jr. Faculty Award for Commitment to Diversity in 2012.

He is married to Deborah Webster Clair ’77, an obstetrician-gynecologist. They have two sons, Brian Clair ’05, M.D. ’12, M.B.A. ’12, and Matthew Clair ’09, who is a Ph.D. candidate in the Harvard Department of Sociology.