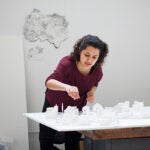 Daniel Ignacio smiled as he gazed across a sunlit Malkin Penthouse at Harvard Kennedy School (HKS), cradling an empty wineglass. He was watching the catering staff smooth out some white tablecloths and stock the buffet table with arugula salad and seared salmon.

The native of Brazil had seen that view many times before, but on Wednesday night, it looked very different. That night, for once, he wasn’t serving the guests — he was one.

“I do this every day,” said Ignacio, 32, gesturing at his co-workers. “In seven years, it’s my first time having some wine” in this room. “I’m so happy to be here. I love working at Harvard — for me, I see my future here.”

Ignacio was one of 15 people honored that evening at a dinner to celebrate Harvard employees who have newly become U.S. citizens with help from the Harvard Bridge Program. The program, which offers education and training to faculty and staff in career, language, and computer skills, pairs prospective citizens with student volunteer tutors from the Institute of Politics (IOP) at the Kennedy School. Since it began in 2003, 192 new citizens have completed the program.

In her congratulatory remarks, Harvard President Drew Faust, a Civil War historian, spoke of the prominent role that the question of who is an American played during that era.

“It was a very important time when the United States asked itself what it meant to be a democracy where citizens had equal access to the privileges of being part of that nation,” Faust said, noting the passage of the 13th, 14th, and 15th amendments and President Abraham Lincoln’s commitment to a “government of the people, by the people, for the people,” as articulated in his historic Gettysburg Address.

“You inspire us to think about those obligations. You inspire us by your dedication to achieving the citizenship that we all share, and you remind us that governments that are about people are something that are too precious to … allow them to perish from the Earth,” she said.

Israel Argueta, 40, came to the Boston area 22 years ago from Guatemala to join family members here. He has been working for nearly three years in the Department of Microbiology at Harvard Medical School as a laboratory technician, preparing media for researchers’ use.

Argueta spent two years studying for the citizenship test on his own before teaming up with tutor Radhika Jain ’14, and passing the exam last year.

“I’ve been waiting on this moment for a long time and finally it’s here,” he said, as his partner, Sulma, and four young children sat nearby. “I feel very excited, very happy.”

Jain, now in her fourth year as a tutor, said that as the American-born daughter of parents who emigrated from India, she rarely thought about her own citizenship until she began helping others prepare for theirs.

“That process of questioning knowledge and the civics system of which we are a part, for me was really humbling,” she told the group.

“What I really admire most about all of our new citizens here is that you deliberately chose to become citizens. And I think that your citizenship is especially powerful, especially significant because you pursued it, you consciously embraced all of the responsibilities and privileges that citizenship confers. I never even had to do that, but the fact that you put the effort in has been really inspiring to me,” Jain said.

As valuable as the tutoring experience is for staff, it’s just as cherished by student volunteers, said Jacob Moscona-Skolnik ’16, who coordinates the IOP tutors. More often than not, there are far more students eager to tutor than there are tutees available.

“I think many people feel that it’s among the most meaningful experiences at Harvard,” he said. “We’re talking about citizenship, we’re talking about immigration, [and] these are really important policy issues, but the personal element is what I think really gets to people, that sense in which the program really brings together people who, on a normal day at Harvard, wouldn’t necessarily be at the same table or talk about these issues with one another.”