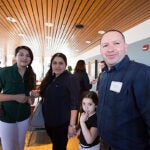 From faculty to grad students, ideas worth exploring

Promised “a little taste” of each of Harvard’s 12 graduate and professional Schools, the audience at the “Harvard Lectures That Last” event on April 9 at the Memorial Church instead received an intellectual banquet.

Attendees heard about solar energy and cell research, and about the charisma America brings to the world stage. They heard calls for a “moral choreography” in the study and teaching of business ethics, and for countering a “digital pandemic” of online misinformation against water fluoridation and vaccinations.

This was the third year the Harvard Graduate Student Government staged the TED-style talks in which professors from across the Schools deliver 10-minute sketches of their research or teaching.

Each speaker offered a window onto his or her work, and the inspiration behind it.

Paulsell told the story of Antoinette Tuff, a bookkeeper at a Georgia elementary school who talked a gunman into putting down his weapon by telling him she loved him. Tuff described afterward how she had been “praying on the inside” as she persuaded the man to surrender peacefully, said Paulsell. This “anchoring of oneself in God” is the sort of phenomenon she seeks to learn from and teach, she said, recalling St. Gregory’s description of the care of souls as “the art of arts.”

Margolis suggested an innovation in thinking about business ethics, a shift from “explaining to equipping,” with the aim of better preparing students for real-world challenges.

“Can we bridge how people actually act in the face of ethical challenges with how people ought ideally to act?”

He talked about “flipping the classroom”: asking at the outset the questions he is asked every day by his M.B.A. students. “What do they need to know, and know how to do, given the challenges and opportunities they are going to face in the world?” Then, he said, “we go out in the world and do real research so we can come back and, from an informed perspective, truly equip them with the knowledge and know-how they need to navigate the world.”

Olsen offered an observation from 17th-century physician William Harvey: “When you want to learn something fundamental about biology, you have to study the rare cases.” From there, he described a recent paper connecting a mutation in a cell receptor called TEM8 with a rare genetic disorder called GAPO syndrome, marked by stunted growth, early hair loss, and a failure of teeth to erupt from the jaws.

Olsen said he and his lab colleagues were particularly excited by the discovery because, in the course of their research on a different disorder, they already had developed a mouse lacking this very receptor. Without knowing it, they had created a “GAPO mouse” that hopefully will help shed light on the syndrome.

“By studying many rare disorders, new insights emerge, especially where fields intersect,” he said. “If that is the only message you remember from this talk, then you’ve got it.”