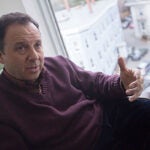 Family ties with a Disney twist

That’s right — not even “Breaking Bad” creator Vince Gilligan was certain of the fate of his antihero, played by Bryan Cranston, when it came time to draft last fall’s season finale.

“Everything was on the table,” Gilligan told a Farkas Hall crowd Thursday in a conversation that proved illuminating but also nail-biting for hundreds of fans seeking a behind-the-scenes glimpse of a show whose five-season run has been hailed as one of the best in TV history.

But before the audience had their say, Gilligan broke down “Bad” with Harvard President Drew Faust, who admitted that she, like others in attendance, was a big fan after having “binge-watched” the series on Netflix.

Her first question: “Where did the preposterous premise come from?”

The Richmond, Va., native explained that the idea came during a phone call from a fellow “X-Files” writer. With that show over, “he joked that we should buy an RV and start a meth lab, and as he said that the idea was one of those eureka moments,” said Gilligan. “The idea that I was about to turn 40, and we were a couple of plain-Jane, law-abiding citizens” created the foundation for a character that was “kind of like me, except with chemistry and scientific knowledge.”

That character turned out to be White, a meek chemistry teacher in Albuquerque, N.M., who “breaks bad” after a cancer diagnosis and, in an effort to provide for his family, begins cooking an unadulterated form of methamphetamine with the help of former student Jesse Pinkman, played by Aaron Paul.

“I knew what the central spine of the show was going to be,” said Gilligan, who wrote the pilot episode on his own before a team of writers signed on. “I wanted to create a show where the protagonist metamorphoses into the antagonist. Historically you haven’t seen that on TV.”

Faust supplemented her interview with scenes from the show, among them Episode 12 from Season Two, in which White lets Pinkman’s girlfriend Jane choke on her own vomit, instigated by heroin and meth use, instead of saving her.

“This was the one time the studio thought killing off Jesse’s girlfriend was turning Walt into Scarface too quickly,” said Gilligan.

Gilligan praised his fellow writers throughout the talk. Stepping back from the writing process was actually a joy and relief, he told Faust, who pointed out his meticulous attention to symbolism and detail, or “granularity” — right down to choosing a character’s shoes.

“I’m more microscopic than macroscopic,” he said. “All that production stuff is more fun than writing.”

That granularity lit up the blogosphere throughout the show’s run. “Color is important, wardrobe changes are important,” said Gilligan. “The layered look Jesse had started to go away” as the series progressed, he said, and Jesse’s shaved head mimicked White’s chemo-induced baldness when Jesse still admired White.

Teasers for Season Two depicted strange, catastrophic scenes whose link to a plane crash over Albuquerque was eventually revealed. But Gilligan said four episodes from that season were titled to be clues of the plane’s fate: “Seven Thirty-Seven,” “Down,” “Over,” “ABQ.”

Oh, and Jesse was doomed — initially.

“My general thought was that we’d get rid of Jesse — he’d die in some horrible way,” Gilligan said. “Very quickly I just knew there was no way we’d want to kill this guy.”

Gilligan told the crowd that his favorite episode was “Fly,” which he said viewers either loved or hated. The episode centered on White and Pinkman in an underground lab, with White going temporarily insane trying to kill a fly that has contaminated their workspace.

Calling it a “bottle episode” written “because we were drastically over budget,” Gilligan said that filming in one location saved a lot of money and that the action was brilliantly directed by Rian Johnson.

In a question from the audience about the relationship between his life and his art, Gilligan admitted that, like White, “I’m not as nice as I appear.”

“When I’m happier, I’m nicer. I think everyone has a darkness, but I’m not a particularly interesting person,” he said. “I do ask myself things like why I never backpacked through Europe when I was younger … Walter White does terrible things, and he does them out of fear. He says, ‘Before cancer, I’d worry about everything.’ After cancer, he says, ‘I sleep like a baby.’ I don’t want cancer, but I want the fear to go away.”

Those who have seen “Breaking Bad” know that White’s fear does go away — and that Jesse is salvaged.

“We tried to be novelistic, we tried to write ourselves into inescapable corners,” said Gilligan. “And I love that this show belongs to you folks now, that people interpret it the way they see fit.”