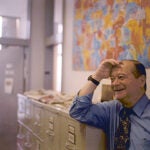 The American Academy of Arts and Sciences today announced the election of 204 new members, including 16 from Harvard University. The new members include some of the world’s most accomplished scholars, scientists, writers, artists, and civic, corporate, and philanthropic leaders.

One of the nation’s most prestigious honorary societies, the Academy is also a leading center for independent policy research. Members contribute to Academy publications and studies of science and technology policy, energy and global security, social policy and American institutions, and the humanities, arts, and education.

Sarah Elizabeth Thomas, vice president for the Harvard Library and Roy E. Larsen Librarian for the Faculty of Arts and Sciences

Rachel I. Wilson, professor of neurobiology