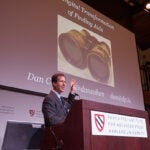 When Daniel Schrag arrived at Harvard as a 30-year-old geologist interested in paleoclimate, the study of climate changes through history, he didn’t realize his career was about to gain another dimension.

“My first day at Harvard, in August 1997, [Professor] John Holdren … walked down the hall and said, ‘Dan, President Clinton … has just asked me to brief each cabinet member individually before the cabinetwide discussion of what we should do about Kyoto [where an international agreement was reached to reduce greenhouse gases]. … What is new about climate science that you can tell me, that I could use to help educate the cabinet?” said Schrag, who now is the Sturgis Hooper Professor of Geology and director of the Harvard University Center for the Environment. “For me, that was ‘Welcome to Harvard.’ ”

When it comes to the closely linked issues surrounding climate change, energy, and the environment, Harvard faculty research regularly grabs headlines (such as January’s battery breakthrough by Sykes Professor of Materials and Energy Technologies Michael Aziz), as do efforts by the University itself to become more sustainable (such as the dozens of LEED-certified green buildings and the biomass-generating facility recently opened at the Harvard Forest). But for Schrag and many other faculty members, advising policymakers — through boards, testimony to Congress, and phone calls fielded in off-hours — is a significant, though unheralded, part of their jobs.

The demands of these advisory roles can be sizable, requiring regular trips to Washington, D.C., travel to meetings overseas, and conference calls and video conferences, as well as the research, writing, and staff time required to prepare reports and official documents.

Such advisory work can take other forms as well. For some, such as Archibald Cox Professor of Law and Director of Harvard Law School’s Environmental Law Program Jody Freeman, who worked in the White House for two years as counselor for energy and climate change, it means taking leave from Harvard to serve in an official capacity. For others, such as Albert Pratt Professor of Business and Government Robert Stavins and Raymond Plank Professor of Global Energy Policy William Hogan, it means heading advisory programs at the University, such as Stavins’ Harvard Project on Climate Agreements and Hogan’s Harvard Electricity Policy Group.

“Harvard’s faculty members bring an enormous range and depth of intellectual power to the fields of energy and the environment,” said Richard D. McCullough, vice provost for research and SEAS professor of materials science and engineering. “Their strong commitment to meeting the challenge of climate change is evident in the work that they do to inform the development of law and policy to advance sustainability and address climate change around the world.”

Faculty members who take on such work do so out of a sense of duty, a commitment to public service, and a belief that the scientific knowledge so painstakingly gained, while important in its own right, reaches its fullest flowering when put to work. The result is often more-informed policymakers, better laws, more effective regulations, and scientists better informed about how government works.

“Why do I do it? The main reason is giving back and being part of the decision-making process at EPA [the Environmental Protection Agency],” said Francine Laden, the Mark and Catherine Winkler Associate Professor of Environmental Epidemiology at the Harvard School of Public Health (HSPH), who sits on the EPA’s Science Advisory Board. “It is important that outside experts provide their expertise to advise the EPA administrator on priorities and provide insights and critiques of reports prepared by or used by the agency. Also I learn a lot.”

In recent years, Harvard faculty members have shepherded the work of thousands of scientists on the Intergovernmental Panel on Climate Change (IPCC), advised the Department of Energy on organizational structures that might foster energy innovation, examined the economics of environmental regulation, and counseled President Barack Obama on science and technology.

John Holdren, the Harvard Kennedy School and Earth and Planetary Sciences professor who walked into Schrag’s office that day in 1997, today directs the White House Office of Science and Technology Policy. Among his duties is chairing the President’s Council of Advisors on Science and Technology (PCAST), which includes Schrag and Broad Institute Director Eric Lander, professor of systems biology at Harvard Medical School, who is the council’s co-director.

Holdren said that advice from academic experts from Harvard and other institutions, as well as that from experts in private industry, is indispensable to him, to senior administration officials, and to Obama himself.

“I’d venture to say that a large proportion of the initiatives and policies that have been advanced by the Obama administration have been influenced in significant ways by ideas contributed by the wider intellectual community,” Holdren said.

Schrag and other faculty members said watching the political gridlock in Washington and in other political bodies can be frustrating, but their efforts can prove gratifying when findings and recommendations result in action. Obama has sat down with PCAST to discuss some reports on various topics. From the give-and-take at those sessions, the advisers say, it’s apparent he’s not only read the reports, but takes their advice seriously. Some recommendations, Schrag said, have become policy, such as the Agriculture Department’s creation of regional hubs to help farmers and foresters deal with the impact of a shifting climate.

“Part of the motivation”

“To me, this is part of the motivation to do the science we do,” Schrag said. “Part of the joy of being at Harvard is connected to these sorts of activities.”

Cherry Murray, dean of Harvard’s School of Engineering and Applied Sciences (SEAS), sits on the Secretary of Energy Advisory Board and has participated in numerous National Academy of Sciences and American Academy of Arts and Sciences studies. Murray said that an important aspect of such advisory roles is that the information and recommendations are impartial and untainted by the political fray.

“Advice provided in this way is really important in the political debate, as it is above politics,” Murray said. “I think it is the best way for academics to formally provide advice to the government, as government officials can then act officially on that advice.”

Such faculty involvement occurs at all levels of government, from local to international. Schrag, together with John Spengler, the Akira Yamaguchi Professor of Environmental Health and Human Habitation at the Harvard School of Public Health (HSPH), and Joyce Rosenthal, assistant professor of urban planning at the Graduate School of Design (GSD), sits on an advisory panel on climate preparedness for the city of Cambridge that looks at how to mitigate future climate impact. While it is important that federal policy be informed by sound science, Schrag said, it’s also important that local officials get good advice, because it is at that level that bricks-and-mortar decisions are being made — seawalls raised and building systems elevated — through zoning rulings and building codes.

One of the highest-profile bodies dealing with climate change is not federal, but international. The IPCC for decades has summarized the state of science surrounding the issue. Harvard faculty members have played a variety of roles with the body, from offering scientific updates as contributing authors, to taking leadership roles, as Alexander Agassiz Professor of Biological Oceanography James McCarthy did as a lead author of 1990’s First Assessment Report and as a co-chair of Working Group II for 2001’s Third Assessment Report, the first that said the effects of climate change were being seen on every continent.

McCarthy said he had hoped that the early IPCC reports would spur more response on the issue, and he has continued to work to galvanize action in his roles with other organizations. He chairs the board of directors for the Union of Concerned Scientists and is a past president and chair of the board of directors for the American Association for the Advancement of Science (AAAS). He is still involved with the AAAS, helping lead an initiative called “What We Know” that puts climate science in plain English to address public confusion about the overwhelming scientific consensus on the issue.

At HKS, Stavins runs the Harvard Project on Climate Agreements, an international, multidisciplinary initiative that seeks to inform the international dialogue over a future global climate agreement. The project does that through research papers and policy reports on an array of subjects related to climate change. In addition, Stavins and project staff attend the international meetings, called Conferences of the Parties, where national delegates seek to iron out details of a new agreement to limit greenhouse gas emissions. The project hosts educational sessions and private meetings with national delegations to discuss the latest research related to particular aspects of the climate negotiations.

Stavins has served on other advisory bodies, including his time chairing the EPA’s environmental economics advisory board, which he said plays an important advisory role for the EPA. Stavins said his most influential encounters, however, may have come in informal conversations tightly focused on a decision-maker’s questions.

Like McCarthy, Stavins also plays a lead role within the IPCC. Stavins, who has served as a lead author on previous assessment reports, is a coordinating lead author for a chapter on international cooperation in the Fifth Assessment Report, nearing release. The work is extensive, Stavins said, and he has wondered more than once whether it’s the best use of his time.

“The IPCC has been a huge amount of work,” Stavins said. “But one thing one has to acknowledge is that in terms of international assessments, it does have tremendous credibility. … So even if there’s a small probability of affecting things, the consequences of that would be potentially very significant.”