A taste of danger 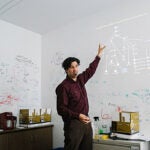 “From the screams, I think they just blew somebody up,” Stephanie Kayden said matter-of-factly.

A short distance away, through the still-bare trees of early spring in New England, a man was screaming, his leg “blown off” by a land mine. Despite his distress and the urging of refugees nearby, members of a Red Cross response team balked at entering the minefield where he lay.

Eventually, one of the man’s companions dragged him to safety, where the Red Cross workers put a tourniquet on his leg and then helped him, hopping on one leg and crying in pain, to a field hospital.

“It’d be nice if they carried him,” Kayden remarked as she watched the small group hobble by.

Kayden was able to keep her cool not only because of her long experience in humanitarian aid, but also because the casualty was a volunteer actor and the Red Cross workers were students in the Harvard School of Public Health’s Humanitarian Academy, a training ground for the chaos, tragedy, and personal danger that mark work amid wars, natural disasters, or refugee crises.

This past weekend, 114 students in two courses — one a traditional, semester-long class in humanitarian response and the second an intensive, two-week session for working professionals — got a taste of the on-the-ground difficulties they may one day face: primitive field conditions, unreliable information, hostile militia, uncertain borders, and needs that range from serious and long-term, such as providing food, shelter, and sanitation for thousands of displaced people, to acute and immediate, such as the life of a man who has lost a leg to a mine.

“What I hope they get out of this is a real understanding of the difficulties of real-world humanitarian work and a sense that they can use the book knowledge they’ve gained in a real-world scenario,” said Kayden, director of the Lavine Family Humanitarian Studies Initiative at the Humanitarian Academy, an instructor in medicine at Harvard Medical School, and chief of the Division of International Emergency Medicine and Humanitarian Programs at Harvard-affiliated Brigham and Women’s Hospital.

The students were joined by 129 volunteers, a half-dozen faculty members, and another six Harvard staff members in the Friday-to-Sunday exercise at the Harold Parker State Forest in North Andover.

Students were organized into 18 teams, each representing a different aid organization. They moved among different sites in the forest during the day, gathering information through observation and conversation, and slept in tents at night. Along the way, they dealt with difficult border officials, militia checkpoints, refugee camps, field hospitals, and media visits.

The overall task was to conduct a rapid assessment of the situation and devise a long-term recovery plan that would meets the needs of refugees for a year, complete with a detailed budget to be presented to donor organizations.

Volunteers who helped bring the effort to life said they enjoyed participating, but also stressed the seriousness of the task. It’s better, they said, that novice humanitarian workers get a first sense of the shock and chaos of danger zones under controlled circumstances.

Sidi Bensalah from the Centre for Safety and Development in the Netherlands posed as a militiaman over the weekend, complete with camouflage clothing and a fake firearm. He had traveled to Massachusetts as a guest lecturer, at the invitation of the Humanitarian Academy, to talk to students about how to handle aggression and violence in the field. His role in the simulation was an encore.

“We try to give them the tools to deal with aggression, with checkpoints, with the difficulties other cultures [present],” Bensalah said. “It is really, really important to do that with the students because they will [run into it as they] travel around the world.”

The key in dealing with such situations, Bensalah said, is politeness and a display of self-confidence — pointers he shared with students.

Gima Forje, a Nigerian student in the semester-long class, first had to adjust to the sleeping quarters.

“I’m today touching a tent for the first time. But it’s a good experience.”

The simulation’s first day was a tough one for Harvard Kennedy School student Heather Dennehy, who by afternoon had already lost her (faux) passport, without which she was helpless at border crossings.

“This hasn’t been my day so far,” Dennehy said, just before it brightened a bit when Kayden handed the passport back to her — it had been found and turned in.

Mason Harrell is a Navy lieutenant and physician studying at HSPH as a resident in occupational and environmental medicine. With an eye on his military experience, he gave the simulation high marks for mirroring the challenges of fluid situations.

“I thought this is a great experience for people who’ve never experienced a border crossing,” Harrell said. “It’s great for people to have exposure to it in a controlled setting.”