A specialist in hows and whys 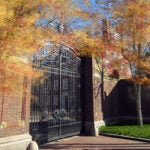 At 125, Johnston Gate gets a facelift

Matthew Rabin wants to know what makes you tick.

One of the nation’s top scholars of behavioral economics, Rabin has been appointed to the first of three endowed professorships in Harvard’s Foundations of Human Behavior Initiative (FHB), a research effort aimed at uncovering the fundamental mechanisms behind human actions.

Rabin will join FHB Director David Laibson, the Robert I. Goldman Professor of Economics, in the study of psychological, social, economic, political, and biological aspects of human behavior.

By bringing together faculty from across Harvard to investigate a wide range of cognitive, social, and behavioral phenomena, the initiative aims to develop new ways to address issues related to health care, economic development, education, and governance.

“We’re very excited about the dual challenge of making basic scientific breakthroughs, and then applying those breakthroughs to pressing social problems,” he continued. “What we’re doing with the Foundations of Human Behavior Initiative is creating the optimal sandbox for that extraordinary research to take place.”

Supporting the research is a gift from the New York–based Pershing Square Foundation. The gift, announced Monday, will back three new endowed faculty positions and provide a research fund open to all Harvard faculty and doctoral students.

“As a foundation, we are interested in innovations that have the possibility of changing the way we think about society,” said Paul Bernstein, CEO of the Pershing Square Foundation. “The field of behavioral science is already important, and it affects virtually everything we do as a foundation.”

“Supporting innovation and new approaches to creating sustainable change is a vital part of what the Pershing Square Foundation was established to do,” said Ackman, CEO and portfolio manager of Pershing Square Capital Management LP. “Understanding the foundations of human behavior is a key to improving people’s health, wealth, and security around the globe. We are inspired by the potential of Harvard’s initiative.”

Importantly, Laibson said, FHB has been built as an interdisciplinary project, designed to incorporate scholars across all of Harvard and tap the full depth of expertise and innovation — among both faculty and doctoral students — on campus.

To count Rabin among those faculty members, Laibson said, is an extraordinary privilege.

“We couldn’t ask for a better first appointment,” he said. “He’s one of the most eminent economic theorists in the world, and his work symbolizes and represents this interdisciplinary approach. He embodies the theme of crossing disciplinary boundaries. His entire career has been about bridging the gap between social psychology, cognitive psychology, and economics.”

After receiving his Ph.D. from the Massachusetts Institute of Technology (MIT) in 1989, Rabin joined the faculty of the University of California, Berkeley, as an assistant professor. He was promoted to full professor in 1999, eventually becoming the Edward G. and Nancy S. Jordan Professor of Economics. He also serves as the director of the Program in Psychological Economics.

A member of the Russell Sage Foundation Behavioral Economics Roundtable and of the Program Committee, Eighth World Congress of the Econometric Society, Rabin held a visiting position at the London School of Economics in 2000-01 and has served as a Taussig Research Professor at Harvard.

Rabin has been named an Alfred P. Sloan Research Fellow, a MacArthur Foundation Fellow (2001-05), and an Econometric Society Fellow. He has also received an Outstanding Teaching Award from the Graduate Economics Association at the University of California, Berkeley, and the John Bates Clark Medal from the American Economic Association. The Clark is second only to the Nobel Prize in the field of economics.