Working toward the Higgs 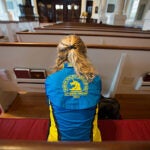 In 1964, Belgian physicist François Englert proposed a solution to one of the universe’s central mysteries: how a particle gains mass.

It would take experimental physicists 50 years to confirm the Higgs field and the Higgs boson.  In 2012, particle physicists at CERN’s Large Hadron Collider found evidence of the Higgs boson, touching off celebrations in the physics world, including at Harvard, where faculty and researchers took a lead role in designing and operating the ATLAS detector, one of two in operation at CERN (which stands for the European Organization for Nuclear Research), near Geneva.

In October, Higgs and Englert won the 2013 Nobel Prize in physics for their theoretical work decades earlier.  (Brout died in 2011.) On Thursday at 8 p.m., Englert will deliver the David M. Lee Historical Lecture in Physics at the Science Center.

“In 1964, François Englert used physical reasoning to make a prediction about the nature of our universe at very short distances: the existence of the Brout-Englert-Higgs boson which gives mass to all other particles in nature,” said Andrew Strominger, the Gwill E. York Professor of Physics. “Fifty years and many billions of dollars later, the largest, most powerful, and most precise machine on earth, the Large Hadron Collider, finally verified this prediction in perfect detail. It is a testimony to the incredible power of the human mind that we are able to understand and predict our world with such astounding accuracy.”

In his Harvard talk, Englert will reflect on some of the motivations that drove the theory, called the Brout-Englert-Higgs mechanism, and touch on the work of the ATLAS and CMS detectors at CERN that confirmed the Higgs boson. He’ll also talk about the implications for unknown universal structures that might be revealed at even higher energies.

“François Englert participated in one of the most important breakthroughs in theoretical physics — understanding the mechanism whereby elementary charged particles acquire their masses,” said theoretical physicist Lisa Randall, the Frank B. Baird Jr. Professor of Science. “The Lee historical lecture was the perfect opportunity for him to share this exciting intellectual story with the Harvard community. The other reason that I personally wanted to invite him is that he is a charming, engaging physicist with a fascinating personal story of how his stint in the army, some acquaintance with engineering, and research in different physics fields let him to this great theoretical breakthrough.”

Englert grew up in a Jewish family in Belgium during World War II, surviving the Nazi purges with the help of local residents and religious leaders, according to a biography posted on the Nobel organization website. He has been a professor emeritus at the Université Libre de Bruxelles since 1998.