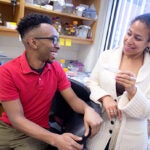 Researchers, ethicists wrestle with how to run a large study that could show effectiveness of ‘treatment as prevention’

An HIV treatment strategy that greatly expands the use of antiretroviral medication may provide a roadmap to an AIDS-free generation, but scientists launching clinical studies may have trouble running the kinds of tests that would find that out.

HIV researchers are grappling with an ethical conundrum on the horizon even as they design and launch studies to test whether “treatment as prevention” can dramatically slash HIV transmission rates in the general population.

Treatment as prevention initiates the use of powerful antiretroviral drugs as soon after HIV infection as possible, a significant change from earlier treatment guidelines that recommended drug treatment beginning when numbers of a key immune system cell, called a CD4 T-cell, fall to less than 350 cells per cubic millimeter of blood. A healthy person’s CD4 cell count is between 500 and 1,200 cells per cubic millimeter.

Though the change was applauded by those who believe earlier treatment is better both for the individual patient and, because it reduces transmission, for the broader society, it jumps ahead of the scientific evidence and threatens to gut the statistical power of studies under way or being planned to answer the question of effectiveness definitively.

That’s because scientific studies rely on the difference between control groups for whom nothing has changed and test groups receiving a new drug regimen to understand whether the drug regimen is working. If countries adopt WHO’s recommendations and widely initiate antiretroviral drug treatment among those whose CD4 count dips below 500, statistical differences between the groups would be harder to detect.

To counterbalance the change statistically, researchers would have to double the size of the study or greatly increase its length, either of which would also greatly increase the costs involved. Other strategies, such as keeping controls on a lesser drug regimen than on the broader society, are ethically risky.

A group of HIV researchers and medical ethicists gathered Friday at the Harvard School of Public Health (HSPH) to investigate the issue and discuss ways to maintain the studies’ scientific validity that would pass ethical muster.

The participants immediately ruled out providing study controls that would offer less care than would be widely available in society. Similarly, the participants said it would be wrong to stop the entire society from moving to the new standard solely for the sake of scientific study.

But they also ruled out just abandoning the studies. Wikler said the treatment as prevention strategy is promising enough that it is “absolutely crucial” that evidence be gathered to support or refute its potential.

If the treatment is found to be effective, scientific evidence will be essential to secure the additional funding that a worldwide change to the new standard would require. But a chance to finally “lick the epidemic” once and for all would be persuasive, Wikler said.

Some believe that possibility exists. Treatment as prevention was cited by former Secretary of State Hillary Clinton as a key element in a strategy to create an AIDS-free generation, and the strategy has proven effective in more limited populations. Among pregnant or nursing mothers, antiretroviral treatment has greatly reduced the transmission of HIV to infants and nursing toddlers. The strategy also has been used successfully among “discordant” couples, where only one partner has HIV. In many of those cases, antiretroviral treatment has kept viral loads low enough to prevent infection of the HIV-negative partner.

Despite those encouraging examples, whether the treatment will work in the general population remains an open question, scientists said. Essex, who is conducting a trial in 30 communities in Botswana, where he has long maintained a partnership with the government, said little is known about how people in the general community will behave. For example, if adherence to the drug regimen drops, that could foster development of drug-resistant HIV, and such strains could begin circulating. Studies in Botswana, South Africa, and Swaziland are designed to answer that and other questions.

If the study host nations adopt the new WHO guidelines, one ethical way to maintain a study would be to coordinate with government adoption of the new policy, since such rollouts are often phased in over time, Wikler said. That would require coordination between researchers and government officials. But if the government were to randomize phase-in of the new treatment nationwide, rather than in phases, the researchers could draw study controls from the groups known not to be receiving the new treatment.

So far, Swaziland has announced that it will adopt the new standard, but South Africa and Botswana have both indicated they are sticking to the 350 CD4 cell count standard for now, minimizing the ethical quandary in those nations.

“If you could prove that treatment as prevention could not only improve people’s health but lick the epidemic … you could say you see the light at the end of the tunnel,” Wikler said.