Teaching on campus and off 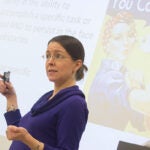 A sampling of college

For years, Tim McCarthy has taught students in Dorchester, in a program where he now has an endowed chair

Tim McCarthy ’93 doesn’t get much sleep.

There are tasks to do, things to write, people to see. Whether on campus or off, often he is greeting and hugging someone. His phone is usually buzzing, and he hardly has time to recuperate from a cold.

“I live my life at a pretty breathless pace,” he said. “You only get one shot at this!”

His one shot has been pretty productive so far. Raised in a boisterous, working-class, Irish-Italian Catholic family in Albany, N.Y., McCarthy said the focus then was on “being your brother’s keeper, your sister’s keeper, your neighbor’s keeper.” That ethos “animated my family and dominated my childhood.”

McCarthy has been involved in the community for as long as he can remember. As a Harvard College student, he worked with the First-Year Urban Program, the Phillips Brooks House Association, and in local schools. That commitment to helping others and to social justice has defined his life and continues to shape it.

Since 2001, McCarthy — a Harvard lecturer on history and literature and on public policy — has taught an American history course to low-income adult students as part of the Clemente Course in the Humanities, a free, nationwide course available to individuals experiencing adverse conditions or economic hardship. He directed the course in 2002-2003, and again from 2005 to 2011.

The yearlong course, which offers six college credits through Bard College and is administered through the Codman Square Health Center in Dorchester, is comprised of five classes on art history, American history, literature, moral philosophy, and writing and critical thinking. Students ages 17 and up are eligible, and most of them live in Dorchester. The late journalist Earl Shorris founded the course in 1995, and there are now dozens of Clemente Courses across the country and world.

“Tim is not only an extraordinarily gifted and generous teacher of American history, he has been the charismatic soul of the Dorchester Clemente Course in the Humanities for more than a decade,” said David Tebaldi, executive director of Mass Humanities, which sponsors the course. “The Stanley Paterson Chair in American History is the first endowed chair at any Clemente Course in the country. No one deserves to occupy it more than Tim.”

“I’m obviously super honored,” said McCarthy. “I’ve long had a deep connection to the community in Boston in ways that have been very important to my life. This course in Dorchester has allowed me to continue that longstanding commitment to my community as a neighbor, as my brother and sister’s keeper. I believe that this kind of education should be available to everybody. And that’s really the driving vision of the Clemente Course, that everybody — no matter your economic status or social position — should have access to studying great books and great works of art and great works of literature and history in all their dimensions.”

As a Ph.D. student at Columbia University in the 1990s, McCarthy envisioned a linear career in academia. But life took a corkscrew course.

McCarthy possesses a robust laugh and sense of humor, and is less the uppity-professor type than the kind of undercover philosopher who’s just as likely to change your life over a pint of beer as in the classroom.

“When I first heard I was going get this chair, I laughed and joked that it was the only chair I’ll ever have other than the one I sit in,” he said.

He’s also the kind of person who can roll with the punches.

Just as McCarthy was preparing to write his dissertation at Columbia, he received a call from the mother of Malcolm Green, a boy from Cambridge whom McCarthy had mentored in the Big Brother program while a student at Harvard.

“His mother asked me to come back and help raise him,” recalled McCarthy.

McCarthy was 26 at the time, and returned to Cambridge in the fall of 1998, just as Green was entering eighth grade.

“I came back and became his legal guardian,” he said. “I not only embraced him as a little brother, but as a son, and co-parented with his mother for five years.” The decision was hard, said McCarthy, “but how do you say no to that?”

He got a part-time teaching gig at Harvard and was offered a tutoring job at Quincy House, which meant free housing and a meal plan for him and Green. McCarthy still lives there. After nearly 25 years, he and Green — now 28 and a 2011 graduate of the Dorchester Clemente Course — are as close as ever.

“I knew that when I made the decision to leave New York to help raise Malcolm that I was throwing myself off course in terms of my professional success,” he said. “But our relationship has been essential — life-saving — to both of us in ways that are impossible to measure.

“I don’t think, 15 years ago, that anyone would’ve predicted that I’d end up where I am. But I always want to be where I am. That’s one thing I decided a long time ago. I was going to live life on my own terms, in my own way, in my own time. That means devoting myself without apology to the world around me, including the Clemente Course.”

McCarthy enjoys the drive from Harvard Square to Codman Square on Monday nights.

“I love going from a classroom at Harvard to a classroom in Dorchester, where I teach the same material to a very different group of students,” he said. “Clemente students bring a set of real-life experiences and perspectives to the texts we’re studying that enrich them in ways that I rarely see at Harvard.”

Many of McCarthy’s students have children, for example. Some are homeless, or coming out of homelessness, working multiple jobs, dealing with the realities of gang and gun violence in their communities, and some have loved ones serving abroad.

His students continue to surprise and exhilarate him. Once, when the Codman Square Health Center was facing budget cuts, the students insisted on missing part of class to attend a town hall meeting where they could voice their concerns. “It was one of these amazing moments where you realize they took the lessons from the week before about the American Revolution and put them into action,” he said.

“When Tim enters a classroom, people feel comfortable speaking their minds. They are inspired to stretch themselves, and they are infected by his enthusiasm,” said Jack Cheng, academic director of the Clemente Course. “It’s one thing to step into an already endowed chair; it’s another thing to inspire a funder to endow a chair and establish a tradition. The [Paterson] Chair is an honor for Tim, and it’s also a promise to the Dorchester community that teachers like Tim will be available to them.”

McCarthy is adamant that his work has been part of a collective effort. He cites the course’s smart faculty and students, its high graduation rate, and strong record of graduates enrolling in college full- or part-time. “We’re among the strongest, if not the strongest, Clemente Course in the country,” he said. “By every measure, we show great prospects for being able to flourish in the future.”

The course also has helped to change McCarthy’s life.

The Clemente Course in the Humanities

The Clemente Course offers college-level courses to underserved students at no cost. Mass Humanities offers the program at three sites in Massachusetts.