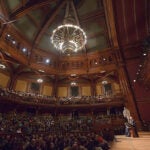 Stanley Jeyaraja Tambiah, known as Tambi (meaning “younger brother”) to friends and acquaintances, the Esther and Sidney Rabb Professor of Social Anthropology Emeritus, and a world-renowned scholar of Buddhism in Thailand, died Jan. 19 in Cambridge after a long struggle with diabetes and Parkinson’s. He was lucid to the end.

The author of 10 books, he was awarded the Balzan Prize, the Huxley Medal of the Royal Anthropological Institute of Great Britain and Ireland, and the Fukuoka Asian Culture Prize. He was a Corresponding Fellow of the British Academy and a member of the American Academy of Arts and Sciences. His students and colleagues honored him with a volume of essays, edited by Felicity Aulino and Miriam Goheen, “Radical Egalitarianism: Local Realities, Global Relations.”

Trained as a sociologist at the University of Ceylon and at Cornell, Tambiah’s first studies were quantitative surveys; village studies of kinship, land tenure, and polyandry; and rural community development. His book “World Conqueror and World Renouncer” analyzed the balancing act between religious and political institutions in legitimating pre-nation-state polities in South and Southeast Asia and established him as a major figure. Tambiah began teaching at Harvard in 1976.

He is survived by his son Jonathan, daughter-in-law Tina, and grandson, Logan, all of Cambridge; his son Matthew of Boston; his younger sister, Beechi Appadurai of Colombo, Sri Lanka; and his former wife, Mary H. Tambiah of Cambridge.

The Harvard University Asia Center has initiated a Stanley J. Tambiah Lecture Series, under the leadership of Professor Michael Herzfeld. The Harvard Anthropology Department, under the direction of Professor Ajantha Subramanian, has created a website for reminiscences by students, colleagues, and friends.