Secrets of the narwhal tusk 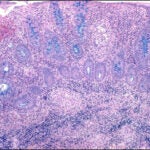 To Martin Nweeia, the narwhal — a mysterious whale with an off-center tusk — is much more interesting than the mythical unicorn.

Now, eight years after he described the narwhal’s distinctive tusk as a sensory organ, the fascinating creature is coming into focus. Nweeia and his colleagues have mapped a sensory pathway between that spiral tooth and the narwhal brain, along the way showing how the animal may use its tusk to suss out its environment.

A practicing dentist in Connecticut and a clinical instructor in the Department of Restorative Dentistry and Biomaterials Sciences at the Harvard School of Dental Medicine (HSDM), Nweeia calls himself “just a curious kid” whose interest in dental anthropology — teeth in people across evolutionary history — spurred him to look at, for example, the elephant tusk and other variants of teeth in animals. But for more than a dozen years he has been chasing narwhals in their native habitat halfway between the Arctic Circle and the North Pole.

The more Nweeia studied narwhals, the less sense they seemed to make.

One spiral tooth projects through the upper lip, jutting nine feet out from only one side of the male’s head. It is a tooth, not an antler with the sex-based size differences well known in the animal kingdom.

Another tooth remains embedded in the other side of the narwhal’s mouth, an asymmetry not found elsewhere in nature. Male narwhal embryos have eight pairs of teeth in their developing mouths, but only two pairs form after birth, with one pair forming the tusks. Usually only one of these teeth becomes the signature tusk.

The world of narwhal research means expeditions to the northern tip of Baffin Island, where Nweeia perches on ice floes or at shore-based camps, dons a dry suit to wade in 36-degree water, braves 120-mph winds, and watches warily for polar bears. Early in his 14-year career of arduous expedition, Nweeia and colleagues discovered that the narwhal tusk is the structural inverse of a human tooth: It has a rigid rod in the center surrounded by a flexible outer layer that contains porous tubules.

“These things all fly in the face of every rule and property that one would learn about teeth, if one were to go to dental school,” Nweeia said.

In 2005 he and colleagues including Peter Hauschka, associate professor of developmental biology at HSDM and Harvard-affiliated Boston Children’s Hospital, reported at a conference that the narwhal tusk is a sensory organ, delivering information about its icy ocean environment. Now a paper, published in the journal Anatomical Record, traces the path from sensation to brain using anatomy, histology, genetics, and neurophysiology.

Nweeia’s team found nerves, tissues, and genes in the narwhal tusk pulp that are known for sensory function and that help connect the tusk to the brain. Armed with this new model, Nweeia needed to confirm that sensory information is actually transmitted along this pathway to the brain from the tusk in living narwhals.

The team tested this hypothesis by slipping a “tusk jacket” — a clear tube sealed with foam at either end — onto a narwhal that had swum into waters off Baffin, still chilly in August.

The stimulus was water, either high or low in salt, which sloshed through the tube and over the tusk in separate tests. The response was a change in heart rate, measured by a Holter monitor, the same portable device that people wear when their doctors want to document heart rhythms. The team hooked electrodes onto the narwhals’ skin, took heart-rate measurements, and then released the animals unharmed after less than 30 minutes.

The scientists measured changes in heart rate and found significant changes depending on water salinity.

Why would varying water salinity matter? Ice formation is critical to the success of an animal species that lives in an ever-changing ocean environment, the researchers surmised. Nweeia has concluded that the narwhal tusk senses variations in the salinity of the ocean waters as a possible way to demonstrate fitness to females. Such ability may help males find females in estrus, or help locate foods essential for newly born narwhals.

Water salinity was the sensory stimulus, which triggered signals to the brain and then sparked responsive changes in heart rate, Nweeia explained.

“This is the first tooth that has been shown by in vivo testing to have sensory function to a normal variable in its environment,” he said.

Nweeia pointed out that human teeth are sensitive, too, but as in other mammals, this has been documented only after significant damage or disease. Human teeth can sense cold or heat or pain, especially when exposed after damage to the hard outer layer.

Dental textbooks feature the hydrodynamic theory of tooth sensitivity, credited to Martin Brännström, which holds that changes in fluid inside tubules within the dentin layer cause variations in pressure that reach nerves in the tooth pulp. Brännström hypothesized that teeth are capable of detecting temperature, pressure, particle gradients, and tactile sensations.

The next steps for Nweeia’s group, Narwhal Tusk Discoveries, are to complete a 12-year study collecting traditional Inuit knowledge of the narwhal and to find an evolutionary link to the tusk’s microstructure.

“Imagine: Exploration, wonder, and mystery are all wound up in this magnificent spiraled tusk and sensory organ,” said Nweeia.

This study was funded by National Science Foundation grants. Additional funding was made by the Harvard School of Dental Medicine, the Museum of Comparative Zoology at Harvard, the Smithsonian Institution, the Explorers Club, Castle Harlan, NSERC, Fisheries and Oceans Canada, and the Nunavut Wildlife Management Board.