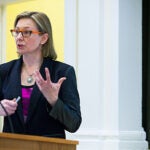 Could be used to deliver drugs, house tiny devices inside human body

Move over, nanotechnologists, and make room for the biggest of the small. Scientists at the Harvard’s Wyss Institute have built a set of self-assembling DNA cages only one-tenth as wide as a bacterium.

The structures are some of the largest and most complex ever constructed solely from DNA, the researchers report today’s online edition of the journal Science. Moreover, they visualized them using a DNA-based super-resolution microscopy method — and were able to obtain the first sharp 3-D optical images of intact synthetic DNA nanostructures in solution.

The work means that one day, scientists may be able to coat the DNA cages to enclose their contents, packaging drugs for delivery to tissues. And, like a roomy closet, the cages could be modified with chemical hooks on which to hang components such as proteins or gold nanoparticles. This could help scientists build a variety of technologies, including tiny power plants, minuscule factories that produce specialty chemicals, or high-sensitivity photonic sensors that diagnose disease by detecting molecules produced by abnormal tissue.

“I see exciting possibilities for this technology,” said Peng Yin, a core faculty member at the Harvard’s Wyss Institute and assistant professor of systems biology at Harvard Medical School, the senior author of the paper.

DNA is best known as a keeper of genetic information. But scientists in the emerging field of DNA nanotechnology are exploring ways to use it to build tiny structures for a variety of applications. These structures are programmable, in that scientists can specify the sequence of letters, or bases, in the DNA, and those sequences then determine the structure it creates.

So far most nanotechnology researchers have used a method called DNA origami, in which short strands of DNA staple together two or three separate segments of a much longer strand, causing it to fold into a specified shape. DNA origami was pioneered in part by the Wyss Institute’s William Shih, an associate professor in the Department of Biological Chemistry and Molecular Pharmacology at Harvard Medical School and the Department of Cancer Biology at the Harvard-affiliated Dana-Farber Cancer Institute.

Previously, Yin’s team had built different types of DNA structures, including a modular set of parts known as single-stranded DNA tiles or bricks. Like Lego pieces, these parts can be added or removed independently. Unlike Lego bricks, they spontaneously self-assemble.

Some applications, however, require much larger DNA structures than had been built before. To meet the need, Yin’s team sought much larger building blocks to match.

First, Yin and his colleagues used DNA origami to create extra-large building blocks shaped like a photographer’s tripod. The plan was to engineer those tripod legs to attach end-to-end to form polyhedra.

But when Yin and the paper’s three lead authors — Ryosuke Iinuma, a former Wyss Institute visiting fellow; Yonggang Ke, a former Wyss postdoctoral fellow who is now an assistant professor of biomedical engineering at Georgia Institute of Technology and Emory University; and Ralf Jungman, a Wyss Postdoctoral Fellow — built bigger tripods and tried to assemble them into polyhedra, the tripods’ legs would splay and wobble.

So the researchers built in a horizontal strut that stabilized each pair of legs. Because matching DNA strands pair up and adhere to each other, they left a tag of DNA hanging off a tripod leg and a matching tag on other leg to which they it to pair.

Once they had the cages built, the scientists visualized them using a DNA-based microscopy method Jungmann had helped developed called DNA-PAINT. In DNA-PAINT, short strands of modified DNA cause points on a structure to blink, and data from the blinking images reveal structures too small to be seen with a conventional light microscope. The method produced ultrasharp snapshots of the cages — the first 3-D snapshots ever of single DNA structures in their native, watery environment.

“Bioengineers interested in advancing the field of nanotechnology need to devise manufacturing methods that build sturdy components in a highly robust manner, and develop self-assembly methods that enable formation of nanoscale devices with defined structures and functions,” said Wyss Institute Director Don Ingber. “Peng’s DNA cages and his methods for visualizing the process in solution represent major advances along this path.”