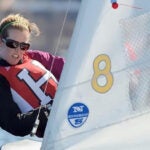 For any student, the decision to pursue a Ph.D. represents a major academic challenge and a multiyear commitment.

For students from under-represented groups, however, the challenges don’t always end at the classroom door. From combatting racial and gender preconceptions to justifying to family and friends the decision to pursue a Ph.D. rather than a professional degree, many face hurdles that can dissuade them from even applying to graduate school in the first place.

In an effort to dispel the notion that graduate school and careers in academia at elite institutions can be beyond the reach of minority students, Harvard last week co-hosted the second Ivy Plus Symposium.

With support from the president’s office and the deans of the Business School, Law School, Kennedy School of Government, and the School of Public Health, the weekend event, co-hosted with the Massachusetts Institute of Technology and co-sponsored by a group of Ivy Plus institutions, attracted 130 undergraduates and 19 program directors from across the country, and was aimed at giving them the chance to get an up-close-and-personal view of graduate student life from current Ph.D. candidates; to network with nearly 60 faculty members, including 20 Harvard faculty, alumni, and administrators; and to get to know each other.

“We and other top universities suffer from the perception that pursuing a graduate degree at our institutions is an unattainable goal,” said Sheila Thomas, assistant dean for diversity and minority affairs, who, along with Stephanie Parsons, helped to organize the symposium.  “The sponsoring institutions conceived of this symposium to break down this wall.  We wanted to provide an opportunity for our faculty and the students attending to engage with each other around their scholarship.”

While increasing diversity at the graduate-school level is a national priority, the symposium is just the latest of Harvard’s efforts to attract greater numbers of minority students.

When he was appointed in 2008, then-Dean Allan M. Brandt made increasing diversity among graduate students a priority, and led the transformation of the recruitment, admission, and retention efforts at Harvard’s Graduate School of Arts and Sciences (GSAS).

Brandt was instrumental in enhancing student experiences at Harvard, through the adoption of best practices in graduate advising and mentoring, increases to the funding package offered to graduate students, and the creation of programs that help graduate students navigate a challenging academic job market.

“The recent Ivy Plus Symposium is but one example of Harvard’s ongoing efforts to assure the great diversity of our graduate programs,” Brandt said. “We have found that diversity is essential to the excellence of our programs, which are committed to preparing the next generation of researchers and scholars, pushing the frontiers of knowledge across the globe.”

Under the leadership of current GSAS Dean Xiao-Li Meng, the Whipple V.N. Jones Professor of Statistics, that commitment has been continued as faculty have been encouraged to engage in practices designed to give students — particularly those whose academic background may be unfamiliar to faculty — equal footing during the admissions process.

In recent years, practices like those have paid large dividends. In the three years since Thomas’ position was created, the number of minority students admitted to GSAS has steadily increased, and the percentage of incoming students who are under-represented minorities has more than doubled, from 5 to 11 percent of the students matriculating and from 7 to 16 percent of U.S. students entering GSAS.

“One of the goals of this symposium is to bring together these potential future applicants with the faculty from all our Ivy Plus schools,” Thomas said. “Whether they apply to Harvard or not, this is about allowing them to gain a different perspective on this place, and for our faculty to get a different perspective on students who attend schools they may not recognize.”

Equally important, Thomas said, the symposium offered a chance for program directors from a host of universities to connect with faculty and administrators.

“It’s important for our faculty to have those conversations with program directors, and vice versa,” Thomas said. “We want program directors to feel comfortable advising their students to apply to our schools. But it’s also important for our faculty to understand what students are learning as undergrads, and what kind of research experiences they’re having. It’s that exchange of information that builds important relationships.”

While Harvard has made supporting a diverse student body a priority, those efforts aren’t limited to the students on campus.

In an effort to encourage undergraduates to consider pursuing a Ph.D., Harvard has developed two programs aimed at giving students hands-on research experience: the Summer Research Opportunities at Harvard (SROH), a 10-week research internship for non-Harvard undergrads in life sciences, humanities, and social sciences; and the GSAS Research Scholar Initiative, a post-baccalaureate program that provides up to two years of individualized research and academic training for people who are considering a Ph.D., but are not ready for admittance.

For students such as Kyrah Daniels, a fourth-year Ph.D. candidate in Harvard’s Department of African and African American Studies who took part in a question-and-answer session with prospective graduate students, the opportunity to attend the conference was too important to pass up.

“I think it’s tremendously important for Harvard to host events like this,” she said. “I wish I had something like this, because I felt so alone in my own grad-school-application process. I felt like I didn’t have anybody to look up to with regard to what the actual nuts and bolts of the process would be like. So I’m grateful I have the opportunity to meet young students who are interested in grad school, because they’re going to be my colleagues one day. And I’m also excited to meet people who want to push research further.”

While Harvard has made strides in efforts to recruit greater numbers of minority students into the graduate ranks, Thomas said there is still more to do to dispel the notion that grad school remains off limits to all but a few.

“In the context of Harvard, we have an even higher bar to clear,” Thomas said. “From our point of view, Stanford, Yale, and the other Ivies are our peers. But from the outside … there is still a perception that Harvard is at a different level, so it’s even more important for us to make it seem like this is a place that you can come. If you decide this is a place you want to be, if this is the place for you, you can be here.”