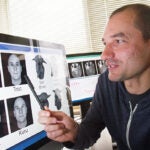 A face is not a fish

Thousands of consumer products containing engineered nanoparticles — microscopic particles found in everyday items from cosmetics and clothing to building materials — enter the market every year. Concerns about possible environmental health and safety issues with these nano-enabled products continue to grow, with scientists struggling to come up with fast, cheap, and easy-to-use cellular screening systems to identify possible hazards of vast libraries of engineered nanomaterials. However, determining how much exposure to engineered nanoparticles could be unsafe for humans requires precise knowledge of the amount (or dose) of nanomaterials interacting with cells and tissues such as lungs and skin.

This is easy to determine with chemicals, but the challenge presented by nanoparticles suspended in physiological media is not trivial. Engineered nanoparticles in biological media interact with serum proteins and form larger agglomerates, which alter both their so-called effective density and active surface area, and ultimately define their delivery to cell dose and bio-interactions. This behavior has tremendous implications not only in measuring the exact amount of nanomaterials interacting with cells and tissue, but also in defining hazard rankings of various engineered nanomaterials (ENMs). As a result, thousands of published cellular screening assays are difficult to interpret and use for risk assessment purposes.

Scientists at the Center for Nanotechnology and Nanotoxicology at Harvard School of Public Health (HSPH) have discovered a fast, simple, and inexpensive method to measure the effective density of engineered nanoparticles in physiological fluids, making it possible to accurately determine the amount of nanomaterials that come into contact with cells and tissue in culture.

The method, referred to as the Volumetric Centrifugation Method (VCM), was published today in Nature Communications.

The discovery will have a major impact on the hazard assessment of engineered nanoparticles, enabling risk assessors to accurately rank the hazards of nanomaterials using cellular systems. Furthermore, by measuring the composition of nanomaterial agglomerates in physiologic fluids, it will allow scientists to design more effective nano-based drug-delivery systems for nanomedicine applications.

“The biggest challenge we have in assessing possible health effects associated with nano exposures is deciding when something is hazardous and when it is not, based on the dose level. At low levels, the risks are probably minuscule,” said senior author Philip Demokritou, associate professor of aerosol physics in the Department of Environmental Health at HSPH. “The question is: At what dose level does nano exposure become problematic? The same question applies to nano-based drugs when we test their efficiency using cellular systems. How much of the administered nanodrug will come in contact with cells and tissue? This will determine the effective dose needed for a given cellular response.”

Federal regulatory agencies do not require manufacturers to test engineered nanoparticles, if the original form of the bulk material has already been shown to be safe. However, there is evidence that some of these materials could be more harmful in the nanoscale — a scale at which materials may penetrate cells and bypass biological barriers more easily and exhibit unique physical, chemical, and biological properties compared with larger particles.

“The VCM method will help nanobiologists and regulators to resolve conflicting in vitro cellular toxicity data that have been reported in the literature for various nanomaterials. These disparities likely result from lack of or inaccurate dosimetric considerations in nano-bio interactions in a cellular screening system,” said Joel Cohen, a doctoral student at HSPH and one of the two lead authors of the study.

This research project was supported by grants from the National Institute for Occupational Safety and Health and the National Science Foundation, and the Center for Nanotechnology and Nanotoxicology at HSPH.