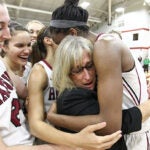 NEW HAVEN, Conn. — The Harvard men’s basketball team became the first team in the nation to punch its ticket into the NCAA tournament tonight with a 70-58 victory at Yale.

Harvard entered the contest with a two-game lead over Yale in the conference standings, and clinched the Ivy League Championship outright with the win. The Crimson, which is the first team to win four straight Ancient Eight titles since Penn did so from 1993 to 1996, will now hear its name called on Selection Sunday for a third straight year and will be making its fifth consecutive trip to the postseason overall.

Harvard improved to 25-4 overall with the victory, coming one win shy of the program record, and has matched its best win total in the Ivy League with a 12-1 mark.

The Harvard’s men’s basketball beat Brown 98-93 on Saturday, wrapping up the “14-Game Tournament.”