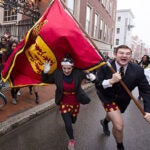 Get up, it’s Housing Day

At No. 12, Crimson readies for No. 5 Cincinnati in NCAA tournament second round

The Harvard men’s basketball team received a 12 seed in the upcoming NCAA tournament and will face 5th-seeded Cincinnati in the second round Thursday at 2:10 p.m. The game will be televised live on TNT from the Spokane Veterans Memorial Arena in Spokane, Wash.