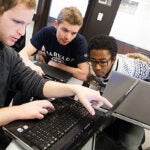 Facilities managers from across Greater Boston gathered at Harvard on Thursday to discuss ways to tackle a major source of energy inefficiency and greenhouse-gas emissions: scientific laboratories.

Labs are often open late at night and on weekends and holidays, but their round-the-clock nature is only part of the problem. The main culprits are ventilation systems that completely exchange a room’s air every few minutes, typically through powerful rooftop exhaust systems. (The massive air exchange ensures safety from noxious chemicals or infectious agents.)

The result, experts said, is that lab buildings have an enormous environmental footprint, consuming six or more times the energy of ordinary office buildings.

At Harvard, labs consume 53 percent of the campus’ energy, even though they take up just 23 percent of its square footage, said Executive Vice President Katie Lapp, who introduced the symposium via video. That figure is even higher elsewhere, with labs often consuming two-thirds of campus power.

The daylong event, with programs at Loeb House and the Harvard Faculty Club, drew more than 100 lab and facilities managers from Boston-area colleges, universities, hospitals, and biotechnology institutions. Utilities were also represented. Speakers included Wendell Brase, vice chancellor of the University of California, Irvine, and chair of the University of California’s Climate Solutions Steering Group.

Brase outlined work on energy efficiency that was spurred by the same law that established California’s cap-and-trade regulatory program, which took effect in 2012. As part of the state’s response to climate change, UC Irvine and the other University of California branches committed to making their campuses carbon-neutral by 2025, which meant energy issues at labs had to be tackled head-on.

Brase has played a lead role. After immersing himself in the construction process for new lab buildings, he questioned some of the assumptions made by architects and engineers in drawing up plans, including, he said, opinions expressed in meetings such as “energy is almost free” and “a certain amount of reheat is inevitable.”

“I got more and more concerned the more I heard about this,” Brase said.

The university initially worked to beat state energy-efficiency standards by 30 percent. Once that was achieved, it aimed higher, seeking to beat the standards by 50 percent in the construction of a stem cell research laboratory. When the building opened in 2010, it was LEED platinum certified and beat the standard by 50.4 percent.

The hitch, Brase said, is that the energy-efficiency upgrades drive up the cost of initial investments. (Costs are returned over time.) Despite that hurdle, UC Irvine has embarked on a $50 million program to retrofit 15 buildings on campus, he said.

What has helped, he said, is an attitude by university officials that the extra cost is a low-risk investment because energy-efficiency improvements have been coming in on budget and savings have been realized.

“We started out skeptical, but as we got more experience, we decided to continue moving forward,” Brase said.

Allen Aloise, director of laboratories and co-director of graduate studies in Harvard’s Department of Chemistry and Chemical Biology, talked about the importance of behavior in saving energy in Harvard’s labs.

Simple acts like closing sashes on enclosed lab benches when they’re not in use saves an enormous amount of money, since the venting system revs up when a sash is up. Officials also have emphasized the purchase of energy-efficient equipment, helped along by a grant program offered by the University’s Office for Sustainability. Aloise spoke about the importance of educational messages and using a variety of strategies, including a competition for energy-efficient labs, to drive them home. The efforts are yielding results. Changes in behavior have led to savings of $240,000 per year, Aloise said.

The event was sponsored by the Boston Green Ribbon Commission, a group of business, institutional, and civic leaders working to developing responses to climate change, and hosted by Heather Henriksen, director of the Office for Sustainability.