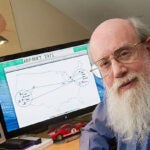 Over the next three decades China’s growth will be such that if its leaders don’t act on climate change, it might not matter what the rest of the world does, Nobel Prize-winning economist Michael Spence said in a Harvard talk Tuesday.

Spence, a New York University professor who served as dean of Harvard’s Faculty of Arts and Sciences from 1984 to 1990, pointed to several environmental and energy factors to consider alongside China’s rapid development.

Population growth is controlled, and per-capita income is expected to continue to rise, which usually coincides with a decrease in the energy intensity of an economy. Further, there is great opportunity to engage in sustainable construction in China because so much — buildings, electric grids, even cities — is still in the planning stages.

The pressing question is whether China will take advantage of opportunities to shift from high-carbon fuels, such as coal, and curb the clouds of pollution billowing from the tailpipes of its burgeoning fleet of cars.

“I think the issue comes down to carbon intensity, and there the story is much less clear,” Spence said. “I am not aware of anything that looks like a comprehensive plan that takes carbon intensity down beyond the effect of, let’s call it, a fairly successful and aggressive program of energy efficiency.”

Spence spoke at the Science Center before a crowd of several hundred. The lecture, sponsored by the Harvard University Center for the Environment and the Harvard China Project, was first in a series on energy, climate, and development in China over the next 20 years.

Spence went deep into the dynamics of economic development in low- and middle-income nations. Most of today’s high-tech, high-wage economies are in Europe or are European offshoots, such as the United States, Canada, and Australia. Just a handful of other nations, such as Japan and South Korea, have been able to develop quickly and avoid what is called the “middle-income trap,” in which rapid initial growth gives way to stagnation at a level below the standards of Western industrialized nations, with per-capita incomes between $3,000 and $10,000 a year.

The middle-income trap, or, as Spence calls it, “middle-income transition,” develops when a nation’s rapid growth gradually cools amid rising incomes, eroding its relative advantage for low-cost manufacturing.

The common trait among countries that have managed to push through the trap, Spence said, is a high level of economic investment, which allows manufacturing to shift to high-value, high-wage products. An important part of that shift is ramping up domestic demand for goods and services. Early in a country’s development, growth can be fueled largely by exports, but as incomes and manufacturing costs rise, domestic demand has to come along, helping support the economy as its global advantage declines.

China will be the next country to see its way through, Spence believes. The government has an enormous balance sheet of assets to cushion the shocks along the way, and seems to have the savvy to employ market-based solutions when they would work best and more traditional command-and-control solutions when not, he said. It also has room to be more decisive than Western democracies, where political will is often the principal factor holding back reforms. High pollution levels, already a major concern, might lead to substantive action. The design of new cities, for example, could incorporate features that reduce the need for automobiles.

However, Spence said he hasn’t yet seen a coherent strategy, so it remains to be seen whether China will successfully address pollution and climate change.

“My best guess is that they’ll go after it much more aggressively because of the environmental contamination of air quality, water quality, the things that … really matter to people,” he said.