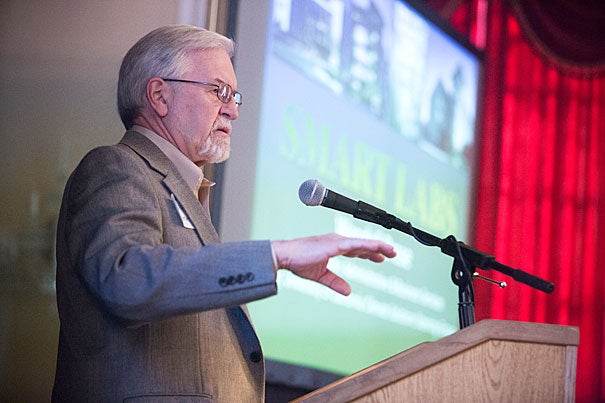 They were two winningly sustainable houses, designed at Harvard to use little or no energy.

A presentation at the Harvard Graduate School of Design (GSD) celebrated this pair of prize-winning student designs: one in France (wholly a computer simulation, created in pixels) and the other in Japan (wholly real, made of native timber).

The setting was “Innovate,” a periodic series of noontime presentations, this one moderated last Thursday by Inaki Abalos, who chairs GSD’s Department of Architecture.

Zero-House was the simulation, created on a computer in stages, from design, to analysis, to redesign, to re-analysis, until it had theoretically met the challenge to transform a commonplace two-story suburban house in eastern France so that it created more electricity than it used, becoming what experts call a “surplus-energy house.”

“One small step was made at a time, and then evaluated,” read the student briefing paper on Zero-House, which noted the “swift, but accurate, feedback” that computer simulation afforded.

The student team of Apoorv Goyal, Keojin Jin, Saurabh Shrestha, and Arta Yazdanseta are master of design studies (M.Des.) students set to graduate in May. They worked with adviser Holly Samuelson, D.Des. ’13, an assistant professor of architecture at GSD who, among other things, studies the energy performance of buildings. Assisting her was D.Des.S. candidate Diego Ibarra.

The biennial competition they won, sponsored by the International Building Performance Simulation Association, typically attracts many more students from engineering than from architecture. To win a contest usually skewed to installing hardware, the GSD team “did what architects do best,” wrote Samuelson in an email. They redefined the problem and “refused to dive into designing complex energy systems.”

Instead, the team combined energy-saving strategies to improve heating and cooling, in search of the right design synergies. They deployed virtual solar panels at the optimum roof pitch, double-glazed windows, improved circulation, installed a heat-trapping berm, and added a Trombe wall, a passive solar use that employs a glass wall to capture and reradiate warmth from wintertime sun.

In the end, the redesigned structure was projected to use 75 percent less energy than the base model provided by the contest rules. Its solar systems also created twice the energy needed for comfort.

The Zero-House team left no footprint on the landscape, but it provided an example of the power of computer simulation to assess strategies for reducing energy use in future houses.

Using virtual models for each step of the energy-saving process allowed for exhaustive cross-checking of strategies, said team member Arta Yazdanseta. It also allowed the team to stretch the bounds of what had been done before. “We needed to break the rules,” she said, “just enough.”

A prize for practicalities

Horizon House, the second structure, went to a far more radical extent, at least in terms of most student competitions. After the building was designed, it was built.

“That’s very, very unusual,” said team adviser Mark Mulligan before the event, which packed the Stubbins Room in Gund Hall. “Getting to build it was part of the appeal,” said Mulligan, a GSD associate professor in practice of architecture, who worked with Kiel Moe, assistant professor of architectural technology, to guide the students.

They won the third annual LIXIL International University Architectural Competition, a contest that provides money for building the first-place design. The 2013 challenge was to design a “retreat in nature,” a 21st-century sustainable house that fit into a setting of ancient quietude in remote northern Japan. Twelve university teams from around the world were invited to compete, and three finalists made presentations that April.

A start-to-finish reality within 10 months, Horizon House gets its name from its intent to preserve a 360-degree view of the flat rural landscape in Taiki-cho, in Hokkaido, Japan’s northernmost prefecture. In winter the land is blanketed with snow, and in summer it’s awash in high grasses. To keep a view of the wide horizon from everywhere in the interior, the house’s living space was built on a wooden platform more than three feet above the ground.

Three team members traveled to Japan in April. Five were there off and on over the summer to negotiate construction details with local contractors, and three went back in November to see the final product. By then, said Sherman, the weather was like that of northern Maine. But Horizon House, with its heat-pump radiant flooring and wood-pellet stove, was a snuggery. Staying overnight in something you helped design, said Puyol, was a high point. “We had to move from models into something that had to be built,” she said.

Staying in Horizon House turned into a test, too. On Puyol’s second night there, a 5.0-magnitude earthquake rumbled through southern Hokkaido. “It works,” she recalled thinking, with another thrill. “The house is safe.”

Horizon House was locally sourced. “We took a very aggressive stance in using wood,” either from local forestland or recycled from structures nearby, said Sherman. (Parts of Hokkaido are suffering population drain, and abandoned structures are abundant.) Concrete was not part of the design, he added, since it is eight times more energy-intensive to make and use than wood. In the end, though, a small amount was used in the subflooring, proving that green dreams are sometimes shaded by realistic needs.

Abalos praised Horizon House not only for its aesthetic appeal but for “performing quite well.” The small structure provides universal lessons in sustainability, making it “more important than it looks.”

The house is fitted with 23 sensors to make it a living laboratory on low-energy, sustainable practices. “This is an ongoing research project,” a path not only to innovation but to an ongoing academic relationship with the University of Tokyo and other schools, Sherman said. “The outcome of more student competitions should be a network,” said Mulligan, one that sustains university connections.

“We need more of this kind of work at GSD,” Moe said. An exhibit on the first floor of Gund Hall showcases the Horizon House timeline, pictures, and video.

“We need more of this kind of work at GSD,” Moe said.