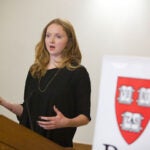 Help you? Love to

Some of the faces are well known, others are familiar to only a few, but all of the pictures in the display inside Harvard Law School’s (HLS) Wasserstein Hall are of women lawyers, policymakers, and others from around the globe who have made a difference and inspired others to do the same.

“We came together and wanted something that would be different from an event, that would really change the atmosphere and reach people beyond those who would immediately be interested in coming to hear someone talk,” said HLS student and LIDS co-president Becky Wolozin, who helped to develop the exhibit.

For the past several weeks, students, faculty, and staff submitted nominations in an online form, offering up names of women who had inspired them throughout their lives. “We got a range of people, from a person’s grandmother who’s a very influential judge in Texas, to, of course, HLS Dean Martha Minow,” said third-year HLS student and WLA intersectional committee chair Vivian Ban, another organizer of the show.

Before the show’s opening reception on Thursday, Dana H. Born, lecturer in public policy at Harvard Kennedy School and a retired brigadier general with 30 years of service in the U.S. Air Force, posed in front of her portrait with her nominator, second-year HLS student Maria Parra-Orlandoni.

Born recalled that when she was in grade school, women weren’t allowed to attend the U.S. Air Force Academy; today women serve in virtually every military occupation, including commanding fighter squadrons and naval combat vessels. She said her first thought upon being nominated was that although she appreciated the recognition, “It’s not about me, it’s about we.’”

“To me, it’s an acknowledgement of the journey of accomplishment that we collectively have had, both past and present,” said Born. “Even more importantly, while talking to the next generation of women present at today’s exhibition I was inspired by their talent and commitment — and foresee even greater accomplishments by these future leaders as they continue the sacred obligation we each have to pay it forward.

“For whatever small measure I may have added to this occasion,” she added, “I would be remiss if I did not acknowledge the women (and men) trailblazers who provided me the inspiration, opportunity, and belief in myself to do my best, and the rest will take care of itself. No one understood this better, nor said it more eloquently, than Sir Isaac Newton when he uttered the immortal words: ‘If I have seen further than most, it is because I have stood on the shoulders of giants.’”

Parra-Orlandoni, who is co-president of the HLS Armed Forces Association, met Born last semester during a meeting at HKS. She praised the retired general for her leadership skills and called her “inspiring and wise.”

“She helps guide me and inspire me to do great things, so I thought she would be an incredible nominee for this great project.”

The HLS show runs through March 14.