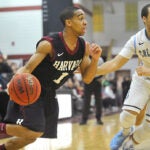 Bathed in crimson light and huddled around an evening campfire, “Eve” and “Zade” — played by Taylor Phillips ’13 and Matt Bialo ’15 — take an apocalyptic stroll through a forest filled with a dark wonder and pathos in the Adams House Pool Theater production of “In the Dark.”

Writer and director Matt Krane ’15 explained the dynamic of his production: “I feel incredibly lucky to work with such a talented and fun cast. The show itself is partially about how words can take you somewhere else, lead you into the woods or to the top of a mountain, make a world or destroy it. I feel like my actors have embraced that challenge and, in every moment of rehearsal, have used words fearlessly to create characters and places and emotions.”

“I think the performance space inside Adams adds a really cool dynamic into the House — it’s incredible that we can put a theater next to a dining hall next to dorms and have them all be part of the same space,” he said. “It makes theater seem less sacred and more a basic part of life, which is really cool. And for me personally, it’s so awesome to have easy access to a theater: If I had done this show after college it would have cost me thousands of dollars and been a logistical nightmare to get together, but because I did it now as a College student with the help of Adams House and the Harvard-Radcliffe Dramatic Club, it was incredibly easy to do.”