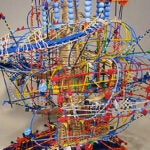 Grasping with the eyes

Benenson and Wrangham have been pursuing parallel lines of research over a number of years with both children and chimpanzees. Their studies demonstrate that males are more likely to interact in large groups consisting of various ranks, whereas females form one-on-one, exclusive relationships with equals. It seemed that the findings would translate into different forms of cooperation in actual organizations, but the idea had never been tested because of the difficulty involved in establishing objective measures of cooperation.

“The question we wanted to examine was: Do men or women cooperate differently with members of their own sex?” Wrangham said. “The conventional wisdom is that women cooperate more easily, but when you look at how armies or sports teams function, there is evidence that men are better at cooperating in some ways.”

While the research focused on the world of higher education, lead author Benenson said she first became interested in differences between how men and women cooperate during her work with children.

“When I studied young children, I noticed that boys were typically interacting in groups, and girls tended to focus on one-on-one relationships,” said Benenson, who discusses these findings in her new book, “Warriors and Worriers.”

“There is even evidence that these differences exist in 6-month-olds — but you can see it with the naked eye by about 5 or 6 years old, where boys form these large, loose groups, and girls tend to pair off into more intense, close friendships.”

What makes the differences particularly provocative, Benenson said, is that chimpanzees organize their relationships in nearly identical ways.

“Chimpanzee males usually have another individual they’re very close with, and they may constantly battle for dominance, but they also have a larger, loose group of allies,” Benenson said. “When it comes to defeating other groups, everybody bands together. I would argue that females don’t have that biological inclination, and they don’t have the practice.”

That’s not to suggest women are inherently flawed when it comes to cooperation.

In fact, Benenson said, women are often thought of as being more egalitarian than men. “But there’s a flip side no one thinks about, which is: What happens when they’re with someone who isn’t the same rank?”

While the study offers evidence that women, in some situations, may not collaborate as often as men, Wrangham made it a point to emphasize the host of unanswered questions behind those differences.

“There is cross-cultural evidence for this phenomenon, you see it in early development, and in one of our closest relatives,” said Wrangham. “That pushes us into thinking that there is a strong biological influence here, but we would never suggest this is impervious to environmental and cultural influences as well.

“Nevertheless these are the kinds of fascinating questions about fundamental sex differences in social relationships that would be tremendously important to recognize if you want to change the way in which women’s access to higher ranks happens,” he added. “What we need to know, now that we have recognized these patterns, is what can we do to ameliorate them?”