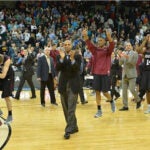 In its first multievent weekend of the spring season (March 22-23), the No. 17 Harvard coed sailing team turned in two top-five performances in two teams races. The Crimson claimed fourth at the Team Race Invitational and took fifth at the 54th Jan T. Friis Trophy.

At the Team Race Invitational, hosted by Boston College, Harvard finished fourth in the six-school field with an 8-7 ledger. At the end of Saturday, the Crimson sat fourth at 4-4 with victories against Cornell, Coast Guard, and the hosts Eagles. Harvard picked up wins over Bears, the Big Red and the Midshipmen on day two to conclude the two-conference competition. The Hawks went unbeaten on day one, 8-0, en route to a 12-3 victory.