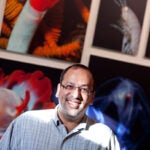 Getting to the source

Now that it’s 25 years old, tech pioneer recalls its past, outlines worries and hopes for its future

The World Wide Web turns 25 this week. To mark the milestone, the Gazette sat down with Scott Bradner, a senior technology consultant with Harvard who has been involved with the Internet since its early days.

Bradner described the succession of networks — ARPANET to CSNET to NSFNET to NEARNET — that helped develop the underlying Internet structure, and then discussed the technology that in the early 1990s took the Internet from the realm of the geeks into our offices, homes, laptops, and, more recently, our phones.

The past provides an indication that nobody really knows what’s coming in the future, Bradner says. But he believes that the potential for government regulation is the threat that looms largest, while the Internet’s spread around the world via smartphones holds its greatest promise.

GAZETTE: You’ve been involved with the Internet pretty much from the start, haven’t you? What can you tell us about the early days here at Harvard?

BRADNER: I was involved from very soon after Harvard’s connection to the ARPANET [Advanced Research Projects Agency Network], I think in 1970 or ’71. I got an account on the Gateway machine at [the] Aiken [Computer Lab] in ’71 or ’72.

GAZETTE: Was that a key machine?

For most of us in the business, January of ’83 was the beginning of the Internet, per se. The term had been used before that, but the ARPANET wasn’t connecting networks together as much as it was connecting computers.

GAZETTE: Did you play a significant role in Internet governance over the years?

BRADNER: To some degree, but early on, not particularly. The governance for the ARPANET was the Defense Department. Because it was their toy, they paid for it.

But we didn’t really have an internal network at Harvard then. There were some miscellaneous connections between William James Hall, where I was, and the Science Center and the Aiken Computer Lab. But they were point-to-point. We forwarded email and things like that, but it was only in those locations, and it wasn’t general connectivity.

January ’86 was when we put the first inter-building Harvard network together that connected 13 buildings, all in FAS [Faculty of Arts and Sciences]. We connected up to the National Science Foundation Network [NSFNET], but we still couldn’t use the network for commercial purposes.

In the late ’80s, Harvard, BU, and MIT joined together to form NEARNET, the Northeast Academic Research Network. We decided we wanted NEARNET not to have that commercial restriction. We also decided that we wanted to be able to talk between NEARNET and the other networks without that limitation. So we insisted the connectivity between NEARNET and other networks be done in a way that would allow a parallel connection that would support commercial traffic.

GAZETTE: So this growing complexity eventually became what we know today as the Internet?

GAZETTE: Tell me about the World Wide Web, and what is the difference between that and the Internet itself.

BRADNER: In the early days, it [communicating between computers] was magic. It was geek heaven. You typed magic character strings in magic formations, and magic happened. To send emails, it was all character-based, character streams you had to type in and understand how to format. You had to do all of that.

GAZETTE: So the World Wide Web is not the network of computers itself.

What’s different is that in the early 1990s, the World Wide Web protocols and software was rolled out. It runs over that same network but provides a user interface that’s much easier to use. That’s this pointing and clicking thing where you click on a URL and you get CNN.

GAZETTE: By contrast, I’ve seen email listed as another way to access information on the Internet, different from the World Wide Web.

The other piece of it is that the World Wide Web developed without getting permission from the network owners. So Tim Berners-Lee comes up with the concepts and the software. He posts some of it himself, and others look at his stuff and say, “I’ll make something compatible.” And they install it on their own systems and start using it. And nobody at Harvard in the networking group has to know that it’s going on. It’s called “permissionless innovation.”

GAZETTE: How about the future? Do you see any particular changes on the way —positive or negative — for either the Internet or the Web?

BRADNER: You asked earlier about Internet governance, and there really isn’t any. And that is a tremendous puzzlement to governments.

There’s about $3 trillion a year of business done over the Internet in the U.S. alone, mostly business-to-business. Around the world, there’s multiple times that. But there’s nobody controlling it. There’s voluntary adherence to standards, but there’s no regulatory authority that says, “This Internet service provider has to connect to that Internet service provider. They have to run these protocols, upgrade the software.”

This is seen as a gap. The former prime minister of France said it was a moral imperative that the Internet gets regulation. And there’s a meeting in Brazil next month on Internet governance and Internet regulation, and there was a meeting in Dubai last December about this.

I think the biggest potential for change is if the governments that would like to control what you can do on the Net get an upper hand. They do have an upper hand in their own countries. In China and in North Korea and a bunch of other places, your Internet experience is very controlled. It’s not very much here.

It might be controlled at work, but at home you don’t have much in the way of restrictions about what you can say, what you can view, what applications you can run, who you can talk to, what you pay for. Yet there’s so much money involved and so much social disruption that’s been brought by the Net, there’s huge pressure by more oppressive governments to control this beast. That, to me, is the biggest area of risk.

GAZETTE: So you see the biggest potential for change not really being a technological one?

BRADNER: The biggest potential for negative change is governance, so it’s nontechnical.

On the other side, the change brought about in the last half-dozen years by the smartphone is breathtaking. It’s breathtaking to us in the U.S., where it’s really just been augmentation. In much of the world, the smartphone is the Internet. It’s the only Internet they’ve got. That kind of empowerment of billions of people — particularly in parts of the world that do not have the infrastructure to support regular Internet — is going to be really mind-bending.

GAZETTE: And the uses or innovations or general education that will come from that remain to be seen?

BRADNER: In general education, things like edX and the MOOCs [Massive Open Online Courses] have the potential to be very, very impactful. The fact that some kid in rural India can take a physics course is breathtaking.

The innovation you have on these mobile platforms, people building apps — Apple’s up to a half-million apps and Android is not far behind — is very empowering. There’s going to be a whole lot more applications that nobody’s vaguely thought of. Basically, watch this space. What is the movie line? Fasten your seatbelts, it’s going to be a bumpy ride.