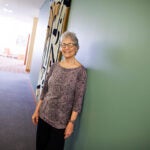 Seizing power from below

Ira Berlin, a pre-eminent historian of African America who is now in his 70s, visited Harvard this week, both to give (lectures) and to receive (an award).

Berlin, who teaches at the University of Maryland, delivered the lectures on “The Long Emancipation” for the Hutchins Center for African and African American Research.

But the award, the W.E.B. Du Bois Medal for 2014, took him by surprise. On Tuesday, Berlin was poised to deliver the first of three days of lectures in this year’s Nathan I. Huggins series when center director Henry Louis Gates Jr. popped the news in front of a standing-room-only crowd.

“His books are required reading,” said Gates, who added that one had “changed my life”: “Slaves Without Masters: The Free Negro in the Antebellum South” (1974). That was Berlin’s first book, and it turned Civil War history on its head. By using census data, he showed that by 1860 more freed blacks lived in the slaveholding South than in the slave-free North. “He did it,” said Gates, “by using numbers in plain sight.”

The medal was the first awarded since the center changed its name in October. Given since 2000, the medal is Harvard’s highest honor for those whose work contributes to the African-American experience. As a Du Bois medalist, Berlin is in stellar company. Last fall, the award went to six recipients, including Supreme Court Associate Justice Sonia Sotomayor and film director Steven Spielberg. At Tuesday’s lecture, stellar company was also present: celebrated historians Bernard Bailyn, David Brion Davis, Evelyn Brooks Higginbotham, and Rebecca J. Scott. “If this roof falls in,” said Gates, “the fate of American history would be in serious trouble.”

Berlin’s later scholarship traces the black American experience in ever-widening geographic arcs. His book “The Making of African America” (2010) challenges a dominant narrative in black history: the movement from bondage to freedom. He offers a counter-narrative, saying that “four great migrations” illuminate a less linear view of the black experience in America. These transformational dislocations, Berlin wrote, were creative and courageous searches for identity, meaning, and a sense of place.

They start with the trans-Atlantic slave trade, continue with the forced migrations of slaves south and inland to work on cotton plantations, include the 20th century migration of blacks northward in search of work, and show new black Americans moving from Africa and elsewhere.

In his lectures, Berlin laid out an argument for reassessing the trajectory of black liberty. “We tend to think of emancipation as a moment,” he said. “I’d like to think of it as a movement, a near century-long movement.” (Berlin’s last lecture, “Bloody Struggle,” is scheduled for 4 p.m. Thursday in the Thompson Room.)

The series had as its subtitle “Rethinking of the Demise of Slavery in the United States.” Berlin recast the temporal frame back to the 18th century, when he said the principles of the American Revolution helped to start the long unraveling of slavery. In 1776, opponents of slavery and slaves themselves acquired the “great weapon” of the Declaration of Independence, said Berlin. As far back as 1781, Thomas Jefferson, a slaveholder, foresaw the institution’s demise.

By the end of the 18th century, states in the upper South were loosening their bonds to slavery as a way of life. Then came “a counter-revolution,” said Berlin, a 19th century in which abolitionists and slaveholders increasingly squared off in escalating conflicts that culminated in the Civil War.

The resonant Declaration of Independence combined with the Bible to create what Berlin called the twin “ur-texts of American nationality.” Meanwhile, state governments, lawyers, and religious abolitionists continued to assault the institution of slavery, battling opponents who, Berlin said, “warred on all fronts.”

Slavery was already weakening by the time of the war that banished it. By 1860, chattel bondage in the South was “leaking like a sieve,” Berlin said. Slaves were fleeing in greater numbers, “self-purchasing” their freedom, and winning “freedom suits” in the courts. So the demise of slavery was not a moment or an event (the Civil War, the Emancipation Proclamation, the 13th Amendment), said Berlin. “Slavery came apart in pieces,” starting nearly a century before the war of 1861-1865.

Still, there were more American slaves in 1860 — about 4 million — than at any other time. The institution was coming apart, but it wasn’t happening quickly.

In the end, four key elements wove through the 85-year story of the “long emancipation” that started in 1776: the primacy of ex-slaves, a shifting debate over race identity, deliberations about the meaning of equality, and constant violence.

Central to the long road to freedom was the core of ex-slaves. They provided opposition that was “direct and personal,” and added fire to the message of white abolitionists. (Berlin acknowledged their efficacy.) These passionate black advocates also helped neutralize widespread apathy to the institution among many slaves, and among blacks already freed.

Free and prosperous blacks contributed to inertia by hewing to hierarchical ideas of authority, by fearing the wrath of slave owners, and by limiting social contact with slaves. This added up to a trope of antebellum black newspapers that “freed people of color” were not doing enough to end slavery. (In many cases, Berlin said, they even bought slaves themselves.) Yet by 1860, freed blacks in the South — living representations that freedom could work in a post-slavery world — had become vital to ending slavery. Berlin called them “the yeast that makes the bread rise.”

Then came another crosscurrent, a debate over the meaning of race. The Declaration of Independence “had made equality normative,” said Berlin, but in racial terms had it made equality real? People asked: What distinguished whites from blacks? Some even asked, are blacks human? (One unhappy consequence of the race debate was an uptick in physiological studies in pursuit of race differences.)

Another element involved a different debate. If the Declaration demands a logic that the American republic be interracial, said Berlin, what does that mean and how far can it go? Thus began a “long chapter on the making and remaking of race.”

As for the “final feature of emancipation” — violence — that was ubiquitous and consistent. With slavery’s grip loosening, “the violence begins almost immediately,” said Berlin. In particular, child kidnapping bloomed. Slavery proponents even snatched pregnant free women and moved them across borders so their children would be born in slave states. Berlin used the analog of the Amber Alert. “Think of this happening all the time,” he said.

The violence ratcheted higher. By the 1820s and ’30s, there were race riots, race “cleansings,” and “open warfare” among vigilante societies, Berlin said, whose actions by the 1850s — the “years of great violence” in Bloody Kansas and elsewhere — foreshadowed the slaughter of the Civil War. By then, “violence was raised to yet another level,” said Berlin. “But the pattern was already established.”

There was social violence too. In 1776, the Declaration of Independence became that “great weapon” of freedom. But in 1857 the U.S. Supreme Court’s Dred Scott decision opened the door for slavery to reach into the North. That set the stage for the war, and for an end to slavery, as well as (in theory) an explicit beginning of black American freedom. It was a long time coming, said Berlin. “Emancipation was a gradual struggle.”