Bringing order to the court 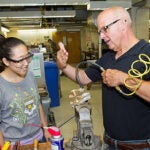 Luke Bornn isn’t the coach of a top-flight NBA team, a general manager with an eye for talent, or an agent representing the next up-and-coming superstar. In fact, he’s only recently become a basketball fan.

But Bornn, an assistant professor of statistics, is part of a team of Harvard researchers poised to rewrite the rules of how coaches, players, and fans think about the game.

Using a massive database tracking every possession of every game played in the National Basketball Association, the team developed a new metric — expected possession value, or EPV — to help coaches and players evaluate the fraction-of-a-second decisions that happen on the court. The researchers are Bornn; Kirk Goldsberry, an associate of Harvard’s Institute for Quantitative Social Science; and Ph.D. students Dan Cervone and Alex D’Amour. The work was presented at the MIT Sloan Sports Analytics Conference this past weekend.

“Until now, we were relying on data gathered at the end of a possession … all we were seeing were snapshots at certain times — this person scored a point at this time or this person turned over the ball at this time,” Bornn said. “But basketball is a continually evolving sequence of 10 people and a ball dynamically interacting.

“What traditional statistics were doing was taking this continuum, chopping it up into very coarse events, and losing a lot of information in the process,” he continued. “With this new data, we can capture the true, flowing essence of basketball.”

While the new paper is the first description of EPV, the statistic relies on the installation of motion-tracking cameras in more than a dozen NBA arenas several years ago.

By recording the position of the ball and all 10 players on the court 25 times a second for every possession, the cameras have helped researchers build a data set that shows how thousands of individual decisions affect the outcome of a possession. This year, Bornn said, the cameras were installed in all NBA arenas, giving researchers even more data to draw from.

To calculate EPV, Bornn and colleagues use a series of algorithms to comb through the data to identify similar situations and calculate how a player’s decisions — whether to shoot, pass, or drive to the basket — can increase or decrease the value of a single possession.

“The simplest example to look at is a player shooting a free throw,” Bornn said. “If someone shoots 100 free throws and makes 60 of them, we know the expected value for any free throw is 0.6, or 60 percent of a point. What we’re doing is looking across all the past season’s data to extend this notion to more complex basketball plays, obtaining an estimate of what, historically, any play would have been worth.”

While EPV can offer insight into the split-second decisions made in individual plays, its real utility may be as a player-evaluation tool.

By comparing hundreds of possessions across an entire season, researchers can assign positive and negative EPV ratings to players according to whose decisions result in more points scored.

“I think it’s a useful measure for GMs in terms of valuing players,” Bornn said. “There are a lot of players out there who don’t have traditionally great stats, but are strong decision-makers. Further, EPV could be used as a tool for coaches to understand where players are making good or bad decisions, so they can try to adjust their play.

“I think it’s also interesting for the fans,” he added. “Much of sports analytics, to some extent, has been a bedroom endeavor until now, and this data may change that. People have asked us if we will someday see a running measure of EPV on ESPN — I’m not sure it will get to that point, but I could see analysts using it at halftime to break down a few plays.”

The statistic isn’t perfect or complete, Bornn acknowledged, and will probably be refined to capture other aspects of the game. But it does mark a new approach for understanding the action on the court, he said.

“The way we frame it is that this is a new microeconomics for the NBA,” he said. “This is a way to understand and value the small-scale decisions and small-scale features of what’s happening on the court. Whereas earlier statistics were akin to macroeconomics, they were seeing the big picture — we’re getting down to the fine details and seeing how the small components interact.”