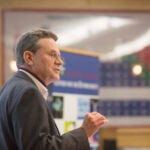 A telescope in the South Pole observing traces of the Big Bang that created the universe has turned up the first evidence of a key moment in that process: the blink-of-an-eye expansion of the universe from a dot into a vast soup of energy and particles.

The discovery, using the BICEP2 telescope at the Amundsen-Scott South Pole Station, provided the first strong evidence of “cosmic inflation,” which scientists say occurred in a fraction of the first second of the universe’s existence, when it expanded billions of times over.  The process was first proposed by MIT scientist Alan Guth in 1981.

Evidence of cosmic inflation came through identifying the effects of gravitational waves for the first time. Gravitational waves are ripples in space-time believed to have been created by the enormous forces at work during cosmic inflation. The finding emerged from a collaborative effort led by researchers at the Harvard-Smithsonian Center for Astrophysics (CfA), Stanford University, the California Institute of Technology (Caltech), and the University of Minnesota.

The waves’ discovery had been “one of the most important goals in cosmology,” according to John Kovac, Harvard associate professor of astronomy and the BICEP2 project leader. Their existence had been theorized and sought by astronomers, but not confirmed until now.

“Theorists speak about them with confidence, but still it’s a wild story,” Kovac said. “The amazing thing is it has a testable consequence that we can build a machine and go out and [look for]. The signature that we’ve measured with our telescope … is not expected to be there except for this prediction of inflation.”

Cosmology is a branch of astronomy that seeks to understand the universe’s broad structure and its evolution since the Big Bang. One of cosmology’s most important tools is a distant echo of the Big Bang, extremely faint background radiation called the cosmic microwave background (CMB).

Astronomers analyzing data from BICEP2, which scanned the clear polar skies for three years through 2012, searched for a polarization pattern in the CMB called “B-modes,” believed to have been created by gravitational waves.

Though researchers found the pattern they were seeking, they were surprised at the strength of the signal and spent three years analyzing data to be sure they were correct in their findings.

Kovac, who credited the work of the dozen people in his laboratory and those at the collaborating labs, has been trying to confirm the gravitational waves for the last 12 years. When he saw them revealed in the data, he said he felt a “mixture of awe and elation,” quickly followed by a determination to ensure they hadn’t been produced by an error somewhere.

While Kovac said the results are “strong evidence” that cosmic inflation occurred, he stopped short of saying they were proof of inflation. Theoretical astrophysicist Avi Loeb, Frank B. Baird Jr. Professor of Science and Harvard Astronomy Department chair, said the findings offer new insights into some of the most basic questions about the universe.

“These results are not only a smoking gun for inflation; they also tell us when inflation took place and how powerful the process was,” Loeb said.

The BICEP2 telescope was operated as part of a broader collaboration involving about a dozen institutions and led by Kovac, Clement Pryke from the University of Minnesota, Jamie Bock from Caltech and NASA’s Jet Propulsion Laboratory, and Chao-Lin Kuo from Stanford’s SLAC National Accelerator Laboratory.

The four appeared at a news conference Monday at the CfA’s offices in Cambridge to announce the discovery, which generated worldwide media attention and immense excitement in the scientific community.

Marc Kamionkowski, a professor of physics and astronomy at Johns Hopkins who was not part of BICEP2 but who attended the CfA news conference, said the discovery was “cosmology’s missing link” that has been sought for 20 years. The findings, he said, will require “new physics” beyond the currently understood Standard Model.

Several teams of astronomers have been searching for the same signal, but the BICEP team was the first to do so, starting work in 2001, which gave them a head start, Bock said. BICEP 2 is one of three telescopes the collaborators operate at the South Pole, where the clear, dry air makes it easier to detect the faint signal from the cosmic microwave background.

“It’s a fantastic place to do science,” said Kovac, who has traveled to the South Pole 23 times. “The South Pole is paradise if you’re a CMB experimentalist … It’s the closest you can get to operating a telescope in space for microwave observation and yet still be on the ground.”

According to theory, the universe’s first second was a busy one. Among other things, the four fundamental forces of the universe separated into gravity, electromagnetism, and the strong and weak forces that work at the atomic scale. The first particles were formed, including the recently discovered Higgs boson, and the universe became much larger.

Though the announcement was the culmination of years of work, researchers said that the findings pose more questions about conditions in the early universe, providing new avenues of exploration.

“This is not the end; this is the beginning,” Pryke said. “It’s mind-boggling to go looking for something like this and actually find it.”