A national perspective on climate change 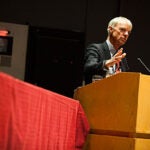 A surprisingly large group of Americans are worried enough about global warming to take action on the issue, said Anthony Leiserowitz, director of the Yale Project on Climate Change Communication, during a Harvard talk on March 6.

For more than a decade, Leiserowitz has been conducting polls to gauge the country’s attitude toward environmental issues. Some 20 million Americans, he said, responded late last year that they already had or definitely would join a campaign to persuade lawmakers to pass climate change laws. However, the movement lacks the organization of other activist efforts, he said.

Five percent of Americans are worried enough that they “definitely would” engage in nonviolent civil disobedience against corporations or government bodies that were making global warming worse, Leiserowitz added.

“Kind of stunning to me,” he said. “That 5 percent right there for all Americans, that’s about 13 million people that say they would do that. Wow.”

The findings are among a range of insights on Americans’ views toward climate change from a series of surveys conducted by the Yale University Project on Climate Change Communication and the George Mason University Center for Climate Change Communication. The most recent poll, which had a margin of error of plus or minus 3 points, questioned 830 Americans age 18 and older. It was conducted from Nov. 23 to Dec. 9.

Leiserowitz spoke at a Harvard Kennedy School (HKS) seminar called “Climate Change in the American Mind.” The event was sponsored by the Belfer Center’s Environment and Natural Resources Program. Cristine Russell, a senior fellow with the program and an adjunct lecturer in public policy, responded to Leiserowitz’s presentation.

Many citizens misunderstand scientific consensus on the issue. Only four in 10 Americans believe that scientists agree that global warming is happening, Leiserowitz said. Opponents of action on climate change, he said, have been successful at casting doubt on the accuracy and extent of scientific consensus, which is 97 percent.

The disconnect is a critical one, Leiserowitz said, because most people don’t have the time to become specialists themselves on such a complex problem and will generally defer to expert opinion. If people believe that scientists disagree among themselves on an issue, they are likelier to tune it out or accept alternate explanations, he said.

The result, Leiserowitz said, is that most Americans view climate change as a problem distant in both time and space, one more likely to affect polar bears, glaciers, and ice caps than their own lives. They miss the more immediate connections to health trends and extreme weather.