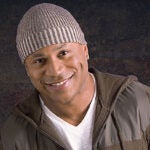 For the bad guys of pro wrestling, boos are the equivalent of cheers. And for David Otunga, J.D. ’06, nothing draws boos like his tag line, “I’m the only Harvard-educated lawyer in the history of the WWE [World Wrestling Entertainment].”

Otunga was the keynote speaker at the Harvard Law School (HLS) Committee on Sports and Entertainment Law’s 2014 symposium on Friday. “Wrestling school is different than law school,” he told the audience of more than 100 students and faculty.

Otunga bills himself as unique — the only Harvard lawyer, movie star, professional wrestler, reality star, bodybuilder, and TV personality in the world. But his biography may sound familiar: His father is Kenyan, his mother is a white American, and he grew up in Chicago. Otunga also clerked and worked at Sidley Austin, the Chicago law firm where Barack Obama, J.D. ’91, and Michelle Robinson Obama, J.D. ’88, met.

Encouraged by his mother (who sat in the front row at the HLS talk) to get an education before he pursued his acting dream, Otunga was securely in his law firm job when he received an offer to appear on the reality TV show “I Love New York 2.” The experience reawakened his acting dream, which his mother encouraged him to pursue.

Off the wrestling mat, Otunga is also known as the fiancé of singer and actress Jennifer Hudson, with whom he has a 4-year-old son. He also provides legal commentary to news networks CNN and HLN.

Otunga said people often ask him what he would say to his son if he wanted to pursue a career in entertainment. “I will say, ‘You can do anything you want, but you need to get your education first,’ ” Otunga said. “And I strongly recommend Harvard Law School.”