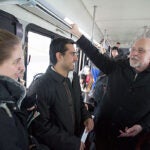 A hello in the snow

Penn (17-5, 7-1) moves into first place in the Ivy League and was led by senior guard Alyssa Baron with 21 points. Two Quakers also notched double-doubles, as Sydney Stipanovich chipped in 13 points and 12 rebounds and Kara Bonenberger added 11 and 11.

Harvard struggled shooting, connecting on 30.8 percent from the floor, including a 26.5 percent showing in the second half. From three, the Crimson shot just 2-of-19, including 1-for-12 over the final 20 minutes.