Trumpet and coffee in hand 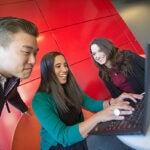 When the walls come down

Marsalis, a bit tired after the previous night’s sixth and final presentation, “New Orleans: The Birth of Jazz,” was nonetheless spirited, with trumpet in one hand, coffee in the other.

Introduced by an admiring Gene Corbin, assistant dean of student life for public service, and former Class of 1955 Executive Director of the Phillips Brooks House Association (PBHA), Marsalis was joined by Jonathan Walton, Pusey Minister and Plummer Professor of Christian Morals, Erin Drake ’14, and Tom Wooten, a Ph.D. candidate in the Graduate School of Arts and Sciences, each with a New Orleans story to tell.

Drake spoke about the allure of that city as a girl growing up in Nashville. She visited for the first time when she was 14, with her mother and aunt. “I felt cool,” she recalled. “I had French beignets. I went to the French Quarter … and even though I’d never been there before, I felt connected to it.” Her aunt’s death during Drake’s freshman year reconnected her with memories of the city, and when she returned that year with PBHA, a student-run, public service organization, she felt embraced by the community.

“I felt at peace for the first time in months,” she said, “and I think that speaks to the spirit of that place. Even if you don’t belong to it, even if you spend a week there, you feel different. You feel changed.”

Wooten agreed, testifying to the neighborliness of New Orleans residents and their passion for living in the moment, which he witnessed firsthand while researching and writing his book “We Shall Not Be Moved: Rebuilding Home in the Wake of Katrina,” which follows the recovery efforts of five hurricane-damaged neighborhoods.

Walton, an Atlanta native, drew laughs when he discussed his “love-hate relationship with New Orleans.” As a college student, he’d travel to that city for weekend fun. “I admit, I don’t remember too much about these trips,” he quipped. “That was before Jesus came into my life.”

In teaching his class “African American Religions: An Introduction,” Walton said New Orleans figures prominently as the intersection of religion and culture. “You had the French, Spanish, in contact with the many African peoples,” he said, “and it created this beautiful gumbo of contradictions.”

Marsalis expounded on those contradictions, acknowledging the warmth and deep religious traditions of the city’s residents, but also the crime. He cited the spellbinding music and culture in the area, and also the occasional ignorance.

“We’re hot-tempered; we fight all the time,” he said. “But we’re playful too.”

The personal and approachable Marsalis told stories about his family members, everything from their penchant for personifying the inanimate (“that chair, yeah, he’s been sitting there for a long time”) to growing up in a highly “dysfunctional” family with an autistic brother. He spoke about becoming more popular than his father, pianist Ellis Marsalis Jr., in drawing people out to gigs as a youngster, raking in $100 for a gig while his father would earn only $40.

“I saw him suffer,” because of the rise of popular music, which Marsalis would play at his gigs, “because that’s what people wanted to hear.”

Toward the end of the talk, Marsalis picked up his trumpet for a song, accompanied by improvisational percussion from the audience.

It was no surprise that time ran over once Marsalis started riffing. “Southerners are great storytellers,” said Corbin.

And when an audience member, herself a New Orleans native, asked Marsalis how he preferred his red beans, Marsalis luxuriated in her accent. “That’s New Orleans right there,” he told the crowd. “Keep talking.”