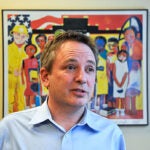 David Malan is standing before the audience in Longfellow Hall asking for step-by-step instructions to make a peanut butter and jelly sandwich. In front of him are all the ingredients: a loaf of bread and jars of peanut butter and grape jelly, along with a knife and a paper plate.

It doesn’t take long for the seemingly simple project to go awry, as people begin to shout out vague commands like “open the bread” and “put some peanut butter on it.” Malan proceeds to violently tear open the plastic bag and drop the entire Skippy jar on two slices of bread.

The exercise was lifted from his fifth-grade class, Malan ’99 said afterward, and was meant to demonstrate the importance of precise and measured thinking in the world of computer science.

A senior lecturer at the School of Engineering and Applied Sciences (SEAS), Malan is best known for transforming CS50 from a fine but unremarkable introductory computer science course into a rock concert-like event, so popular that sessions have to be held at Sanders Theatre to accommodate the nearly 700 undergraduates who regularly sign up.

Malan’s PB&J demonstration Thursday afternoon was the first in a new series of master classes at Harvard Graduate School of Education (HGSE) to celebrate inspirational teaching and showcase fresh modes for powerful learning. While there is a comparable series for faculty, “Talking About Teaching,” until now, there had been nothing specifically for HGSE students.

“We wanted to do something that would not only be powerful for members of the Ed School community, but also could welcome people from throughout Harvard to reflect on what great teaching looks like,” said Matthew Miller, HGSE’s associate dean for academic affairs.

The series puts a twist on the typical approach to talking about teaching by having attendees participate initially as learners in the class, and then — based on the master’s approach, content area, and pedagogy — talk at length with the invited instructor about what they did and why they did it, and more importantly, what worked and what didn’t.

“We’ll try to pull the curtain back on what David Malan or the invited instructor’s assumptions were — what were his intentions behind how he was leading that learning experience — and allow the audience to ask questions and be in dialogue around understanding what he was trying to do,” said Miller.

Jennifer Roberts, the Elizabeth Cary Agassiz Professor of the Humanities, will lead the second master class on May 1. An art historian and award-winning teacher, Roberts is best known for her innovative approach to humanities education and as the designer of a new humanities framework, “The Art of Looking,” a course that introduces students to the humanities through the textures and complexity of the visual world.

After Malan’s lecture, audience members asked about his approach to CS50, which went from a respectable 67 percent retention rate after “shopping week” in 2006 to a 98 percent retention rate the following year, when he took over. The course is demanding but a huge draw for students, most of whom have no intention of becoming computer programmers.

“My number one goal when I inherited the reins in 2007 was to really try and turn that [intimidating] reputation on its head and to make the course much friendlier to students that we describe euphemistically as those ‘less comfortable’” with computer science, Malan said. “And not to chip away at the workload and not to chip away at the difficulty, but to really just change the tone of the course.

“We went to great lengths to build out a support structure over the past seven years in terms of manpower, in terms of resources online for students, to really make sure that it’s an environment that all students can succeed [in] completely irrespective of prior background or comfort,” he said.

The audience was especially curious about Malan’s affinity for physical exhibitions of abstract ideas, such as having volunteers hold up pieces of paper with numbers on them that the audience translates into ASCII text words, or ripping a phone book to show a simple algorithm for increasing the likelihood of locating a specific name in the book.

“I think the greatest opportunity to afford a class is for memorable moments,” he said. “We take fairly arcane topics, fairly dry topics that are tough to get excited about, but conflate them with visuals and memories that students have so that they have a mental model to fall back on that’s far more compelling, I think, than a black-and-white slide.”

Malan and his staff also produce the edX version of CS50 and use the insights they’ve gleaned from the multimedia approach of massive open online courses to help refine, and even reconsider, the Sanders Theatre experience.

“I have been increasingly questioning pedagogy and what the role of lectures should be. Because it’s certainly not the best use of people’s time to just sit passively in seats and have someone like me talk at them. I think that can be done — to the extent that it needs to be done — much more effectively online in the form of video,” where students can quickly target what they need to learn.

“I think the value of being in person is the memories you have, the energy you feel that you can’t quite convey if you just have a laptop.”