Sizing up the Big Bang 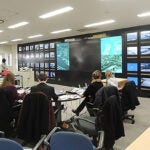 Astronomer Robert Wilson lifted his fingers to make air quotes around “problem.” The Nobel laureate’s problem occurred 50 years ago and would help explain the origins of the universe. In fact, it turned out to be the echo of the Big Bang from 13.7 billion years ago, which Wilson detected through a massive, horn-shaped antenna.

Working at Bell Labs in Holmdel, N.J., Wilson and colleague Arno Penzias “were measuring thermal noise, and our measurements showed a problem. The antenna had almost twice as much noise as it was supposed to. It was a real disappointment.” He went on, “In retrospect, it was the first evidence we’ve ever had for cosmic background radiation.”

Wilson’s recollection came as part of a program titled “50 Years After the Discovery of the Big Bang” Thursday at the Harvard Smithsonian Center for Astrophysics (CfA). He was joined by Avi Loeb and Robert Kirshner, both of Harvard, and Alan Guth of Massachusetts Institute of Technology (MIT).

The Nobel-winning “discovery” took months to fully understand, Wilson said. “There was no ‘Aha!’ moment,” he told the crowd at Phillips Auditorium, “just a long period of getting to the bottom of our problem. We tried everything we could to explain this noise, and we ruled out most explanations.”

Wilson had a list of prime suspects for the antenna noise. Urban interference from New York City? No, he determined, because the radio hiss was the same in every direction. Other possible explanations ranged from pigeon droppings to a nuclear detonation.

Eventually, Wilson and Penzias contacted a Princeton physicist named Robert Dicke, who had been researching the Big Bang theory and found that the residue of the event should take the form of low-level background radiation. It turned out that Wilson’s “noise problem” wasn’t pigeons at all, but a signal from the beginning of the universe. “Arno and I were very happy to have an explanation,” Wilson said.

Important questions remained. For example, what force propelled the Big Bang? MIT’s Guth spoke about the expansion of the universe. “The region destined to become our present universe was once about the size of a marble,” he said. The force that began propelling the Big Bang’s expansion — “inflation” — was a repulsive form of gravity, something explained by particle physics. “Inflation is a possible answer to the question of what propelled the gigantic expansion of the Big Bang,” Guth said.

Kirshner, the Clowes Professor of Science, offered a look at our “accelerating universe,” explaining that the farther objects are from us, the faster they’re moving away. To illustrate, he asked the audience to imagine that he could magically double the size of Phillips Auditorium. Lifting his arms like a sorcerer casting a spell, he said: “The person sitting next to you would now be two chairs away, but people sitting four chairs away will have moved eight chairs away.

“And not because they know anything bad about you,” he quipped.

Loeb, the Frank B. Baird Jr. Professor of Science, closed the discussion with big questions about the future of our universe. Distant galaxies will accelerate away from us faster than the speed of light, thus rendering them unobservable. “Eventually, we will lose sight of the evidence for the Big Bang, so we’ll have books describing it but won’t be able to verify it,” he said. “So will cosmology then become just like religion, based on belief only?” The question was left to linger.

The program was an entry in the CfA’s Observatory Nights series, whose wider goal, said grad student Courtney Dressing, “is to bring astronomy to the public. We’re trying to inspire young people and adults to continue learning about our universe. We try to design talks that appeal both to first-time attendees and experienced amateur astronomers.”

The next Observatory Night, March 20 at 7:30 p.m., will feature Dava Sobel, author of “A More Perfect Heaven: How Copernicus Revolutionized the Cosmos.”