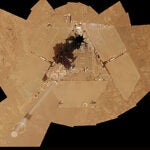 How researchers can capture ultrasharp images of multiple cell components at once, and why that’s important

A new microscopy method could enable scientists to generate snapshots of dozens of different biomolecules in a single human cell at once, a team from the Wyss Institute for Biologically Inspired Engineering at Harvard University reported Feb. 2 in Nature Methods.

Such images could shed light on complex cellular pathways and potentially lead to new ways to diagnose disease, track its prognosis, or monitor the effectiveness of therapies at a cellular level.

Cells often employ dozens or even hundreds of different proteins and RNA molecules to do a complex job. As a result, cellular job sites can resemble a busy construction site, with many different types of cellular workers coming and going. Today’s methods can typically spot at most three or four types of these tiny workers simultaneously. But to truly understand complex cellular functions, it’s important to be able to visualize most or all of those workers at once, said Peng Yin, a core faculty member at the Wyss Institute and assistant professor of systems biology at Harvard Medical School (HMS).

“If you can see only a few things at a time, you are missing the big picture,” Yin said.

Yin’s team sought a way to take aerial views of job sites that could spot dozens of types of biomolecules that make up large cellular work crews.

To capture ultra-sharp images of biomolecules, the team had to overcome laws of physics that had stymied microscopists for most of the last century. When two objects are closer than about 200 nanometers apart — about one five-hundredth the width of a human hair — they cannot be distinguished using a traditional light microscope: The viewer sees a single blurry blob where in reality there are two objects.

Since the mid-1990s, scientists have developed several ways to overcome this problem using combinations of specialized optics, special fluorescent proteins, or dyes that tag cellular components.

As a graduate student, Ralf Jungmann, now a postdoctoral fellow working with Yin at the Wyss Institute and HMS, helped develop one of those super-resolution methods, called DNA-PAINT. DNA-PAINT can create ultra-sharp snapshots of up to three cellular workers at once by labeling them with different colored dyes.

They then repeat the process to visualize a second target, a third, and so on. Then they overlay the resulting images to create a composite image in which each biomolecule — each cellular worker — is assigned a different color. This allows them to create false-color images that simultaneously show many types of biomolecules — far more than they could simultaneously visualize by labeling them with different colored dyes. These false-color images allow them to spot enough cellular workers at once to capture the entire scene.

To test Exchange-PAINT, the researchers created 10 unique pieces of folded DNA, or DNA origami, that resembled the numerals 0 through 9. These numerals could be resolved with less than 10 nanometers resolution, or one-twentieth of the diffraction limit.

The team was able to use Exchange-PAINT to capture clear images of the 10 different types of minuscule DNA origami structures in one image. They also used the method to capture detailed, ultra-sharp images of fixed human cells, with each color tagging an important cellular component — microtubules, mitochondria, Golgi apparatus, or peroxisomes.

Yin expects that with further development, the method will be able to visualize dozens of cellular components at once.

“Peng’s exciting new imaging work gives biologists an important new tool to understand how multiple cellular components work together in complex pathways,” said Donald Ingber, director of the Wyss Institute. “I expect insights from those experiments to lead to new ways to diagnose and monitor disease.”

Ingber is also the Judah Folkman Professor of Vascular Biology at  Harvard Medical School and Boston Children’s Hospital and professor of bioengineering at Harvard School of Engineering and Applied Sciences.