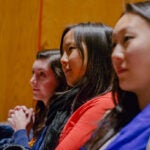 On the plains of Namibia, millions of tiny termites are building a mound of soil, an 8-foot-tall “lung” for their underground nest. During a year of construction, many termites will live and die, wind and rain will batter the structure, yet the colony’s life-sustaining project will continue.

Inspired by the termites’ resilience and collective intelligence, a team of computer scientists and engineers at the Harvard School of Engineering and Applied Sciences (SEAS) and the Wyss Institute for Biologically Inspired Engineering at Harvard University has created an autonomous robotic construction crew. The system needs no supervisor, no eye in the sky, and no communication. It uses simple robots — any number of robots — that cooperate by modifying their environment.

Harvard’s TERMES system demonstrates that collective systems of robots can build complex, 3-D structures without requiring a central command structure or prescribed roles. The results of the four-year project were presented this week at the AAAS 2014 Annual Meeting and published in the Feb. 14 issue of Science.

The TERMES robots can build towers, castles, and pyramids out of foam bricks, erecting staircases that let them reach the higher levels and adding bricks wherever they are needed. In the future, researchers say, similar robots could lay sandbags in advance of a flood or even perform simple construction tasks on Mars.

“The key inspiration we took from termites is the idea that you can do something really complicated as a group, without a supervisor, and, secondly, that you can do it without everybody discussing explicitly what’s going on, but just by modifying the environment,” said principal investigator Radhika Nagpal, the Fred Kavli Professor of Computer Science at SEAS. She is also a core faculty member at the Wyss Institute, where she co-leads the bio-inspired robotics platform.

Most human construction projects are performed by trained workers who operate in a hierarchical organization, said lead author Justin Werfel, a staff scientist in bio-inspired robotics at the Wyss Institute and a former SEAS postdoctoral fellow.

“Normally at the beginning, you have a blueprint and a detailed plan of how to execute it, and the foreman goes out and directs his crew, supervising them as they do it,” he said. “In insect colonies, it’s not as if the queen is giving them all individual instructions. Each termite doesn’t know what the others are doing or what the current overall state of the mound is.”

Instead, termites rely on a concept known as stigmergy, a kind of implicit communication. They observe each other’s changes to the environment and act accordingly. That is what Nagpal’s team has designed the robots to do. Supplementary videos published with the Science paper show the robots cooperating to build several kinds of structures, and even recovering from unexpected changes to the structures during construction.

Each robot executes its building process in parallel with others, but without knowing what else is working at the same time. If one robot breaks, or has to leave, it does not affect the others. This also means that the same instructions can be executed by five robots or 500. The TERMES system is an important proof of concept for scalable, distributed artificial intelligence, researchers say.

Nagpal’s Self-Organizing Systems Research Group specializes in distributed algorithms that allow very large groups of robots to act as a colony. Close connections among Harvard’s computer scientists, electrical engineers, and biologists are key to her team’s success. The researchers created a swarm of friendly Kilobots a few years ago and are contributing artificial-intelligence expertise to the ongoing RoboBees project, in collaboration with Harvard faculty members Robert J. Wood and Gu-Yeon Wei.

“When many agents get together — whether they’re termites, bees, or robots — often some interesting, higher-level behavior emerges that you wouldn’t predict from looking at the components by themselves,” said Werfel. “Broadly speaking, we’re interested in connecting what happens at the low level, with individual agent rules, to these emergent outcomes.”

Co-author Kirstin Petersen, a graduate student at SEAS with a fellowship from the Wyss Institute, spearheaded the design and construction of the TERMES robots and bricks. These robots can perform all the necessary construction tasks — carrying blocks, climbing the structure, attaching the blocks, and so on — with only four simple types of sensors and three actuators.

“We co-designed robots and bricks in an effort to make the system as minimalist and reliable as possible,” Petersen said. “Not only does this help to make the system more robust, it also greatly simplifies the amount of computing required of the onboard processor. The idea is not just to reduce the number of small-scale errors, but more so to detect and correct them before they propagate into errors that can be fatal to the entire system.”

In contrast to the TERMES system, it is currently more common for robotic systems to depend on a central controller. These systems typically rely on an “eye in the sky” that can see the whole process, or on all of the robots being able to communicate frequently with each other. These approaches can improve group efficiency and help the system recover from problems quickly. But as the number of robots and the size of their territory increase, these systems become harder to operate. In dangerous or remote environments, a central controller presents a single failure point that could bring down the whole system.

“It may be that in the end you want something in between the centralized and the decentralized system. But we’ve proven the extreme end of the scale: that it could be just like the termites,” said Nagpal. “And from the termites’ point of view, it’s working out great.”

The research was supported by the Wyss Institute.