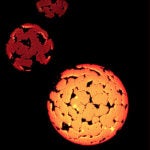 On Christmas Eve, Maria Ignacia Arrasate, M.Des.S. ’14, was fly-fishing in southern Chile. She checked her smartphone and got some good news: You won.

Natalia Gaerlan, M.U.P. ’14, got the same good news. The message popped onto her monitor while she was Skyping with family in Europe.

“You” was a team of six students at Harvard’s Graduate School of Design (GSD). “Won” meant finishing first in an international academic competition.

In September, Toyo University in Japan invited 13 university design programs, including three in the United States, to gather teams and answer a challenge: In 30 pages or less, lay out solutions for helping the remote eastern Tohoku region recover from its triple disaster of March 2011: earthquake, tsunami, and nuclear meltdown.

Like most such competitions, the ground rules for Tohuku Recovery were quite specific. Competing teams had to address 11 policy directives, including safety, energy, transportation, and pre-disaster planning. The solutions also had to be sustainable. The challenge was like a two-month mini-course in all that matters for urban planners, said team adviser Jerold Kayden, the GSD’s Frank Backus Williams Professor of Urban Planning and Design. (Coincidentally, he is teaching a pioneering course this semester on design competitions.)

The Harvard team had an entry ready by mid-November. “Here Today, Here Tomorrow” was jammed with maps, tables, and pointed text, proposing 16 strategic interventions in seven areas. Most were in the planning and policy realm, as intended by the competition.

The report proposed both physical solutions (mobile health clinics, for instance, and a battery industry hub) and social solutions (community centers, apprenticeship programs, and more). It suggested ways to empower local officials, and called for creating a regional development agency.

The comprehensive plan also opened the door on problems that beset the region even before 2011, including an aging population, decreases in the labor force, and crumbling infrastructure.

In the end, the report proved to be a model of rapid research, creativity, and student collaboration, said Kayden, who added, “If I could bottle this team, I would.” (The students worked on the project outside their heavy courseloads. As for getting little sleep for two months, said student Elise Baudon, “We’re used to that here.”)

The aftermath of the Japanese disaster presented “a compelling social problem,” said student Kristen Hunter, particularly since coastal regions are facing the consequences of climate change and sea-level rise. “This was not about winning a competition,” she added. “This was about trying to address one of the century’s largest problems, one that is going to continue.”

Hunter was the team leader. She had studied medieval Chinese history as a Harvard undergraduate and in a Ph.D. program at Cornell, but today specializes in real estate finance and “PPPs,” or public-private partnerships.

“We’re not experts,” she said, so students approached the competition with equal parts energy and humility. But fresh insight from outsiders is what Toyo was after, said Kayden.

“The disadvantages of any outsider student team are obvious. They’re outsiders, and they’re students,” Kayden observed. “But the advantages are also interesting. Really good ideas can come from people who are oddly unconstrained. Humility and creativity, combined, can be a very powerful instrument for change.”

Most of the Harvard team members did have some experience in remedying disasters. Arrasate spent three years with a government recovery agency in Chile, starting in 2010 a month after an 8.8-magnitude quake there was followed by a killing tsunami. “We confronted more or less the same situation as the Japanese government,” she said, so the Tohuku competition “reaffirmed what I was interested in before I came to GSD.” (Arrasate is completing the “risk and resilience” track in the master of design studies program.)

Following Hurricane Sandy, student Trevor Johnson spent a summer in public service with city planners in New York City. “These are the kinds of issues around the world that cities are having to deal with,” he said.

Gaerlan had worked for the United Nations on natural disaster resilience in Thailand. Karina Gilbert studied flood control in Jakarta, Indonesia. Baudon, a biologist by training and a student of Hurricane Sandy, was drawn to the competition because of her interest in assessing environmental harm. “All of us had affinities with this type of work to start with,” she said.

But before this month only Hunter had even been to Japan. Facing them last fall on their drawing boards at Gund Hall — and hanging over the many interviews they did with witnesses and the hundreds of documents they examined — was the magnitude of what had happened on March 11, 2011.

In the space of six minutes, a magnitude 9.0 earthquake heaved twice with such force that the region shifted 9 feet to the east and the coastline sank 18 inches. The axis of the Earth itself shifted by 20 centimeters. Fifteen minutes later, a tsunami sent a wall of seawater 120 feet high scouring across 216 square miles. A meltdown at three flooded nuclear plant reactors contaminated 700 square miles and exiled 150,000 residents.

During the Great East Japan Earthquake, nearly 16,000 people were killed and more than a million buildings were destroyed or compromised.

Five of the six winning GSD team members traveled to Japan this month for the awards ceremony, with Toyo covering expenses for two. The team returned to Cambridge Sunday, after touring the Tohoku region they had spent two months researching. It was blanketed with snow. Little evidence of the devastation was still standing.

“It’s difficult to grasp the scale of the destruction by being there now,” said Johnson, though he saw vast, haunting stretches of vacant land, and many bridges still missing spans. It was also a shock, said Baudon, to pass street after street containing only building foundations.

The student report contained handsome maps among its many photos and graphics, including sky-view depictions of the region that relied on experts from the Harvard University Center for Geographic Analysis. But the tour supplied on-the-ground reality, said Hunter, especially regarding the tsunami-prone Sanriku coast.

The tour added another insight, said Johnson. “It changed our notion of the time horizon.” Official reports, he said, “made it seem like recovery was further along than it was.”

During its week in Japan, the GSD team met with local and national government officials. At Toyo, they were also invited for an extra day to begin collaborations with university faculty and students. The point was to put the ideas in “Here Today, Here Tomorrow” into action. “It seems like there’s real interest in moving them forward,” said Gilbert, who thought that the mobile clinics would be among the first action steps.

Collaborations will continue, added Baudon. “A lot of us would love to go back.”