Of masks and mirth 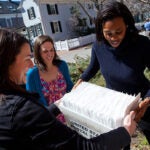 A Harvard education, without worry

“I feel like there’s only a couple of times in your life you can go to a masquerade ball,” said Katie McKillen, a student at the Harvard School of Public Health. “It’s like watching the red carpet of Harvard.”

Nearly 2,000 University men and women on Saturday evening made an entrance up the graceful winding staircase to the second floor of the John Joseph Moakley U.S. Courthouse, where they were greeted by musicians, living statues, and a stunning view of Boston Harbor, all in celebration of Harvard’s fourth masquerade ball.

Philip Harding, A.L.B. ’12, is a Kennedy School student and president of the Harvard Graduate Council, the government for the 12 graduate and professional Schools. He founded the ball in 2010 when he was attending the Extension School and was president of its student association. He wanted more than just an elegant, beautiful night, he wanted a social event that brought the University community together. That fall, Harding had heard Harvard President Drew Faust speak about the idea of One Harvard. That resonated with him, and he got the idea for the ball.

“That first year was scary,” Harding said, noting that at first there was some skepticism that the ball would pull people together.

“It’s something we struggle with at Harvard, especially at the graduate level. You stay in your silo, and you don’t get a lot of interaction outside of your School. [But] when you step outside, you make friendships in a different industry. That was the impetus.”

Harding said that for One Harvard to work, students must step outside their everyday bubbles and experience something greater.

“Along with that,” he said of the ball, “it’s beautiful and extravagant. People dress up, and the costumes are fantastic, and students from each School perform.”

The Graduate Council and Extension School volunteers organized the first ball. There were 500 tickets, and it sold out fast. Two masquerades later, attendance doubled and again sold out. This year, it nearly doubled again, and the ball had to be moved off-campus to accommodate all the guests.

“We sold more tickets in the first hour and a half than we did all of last year,” said Harding.

The event brought out students in lovely ball gowns and tuxedo. Some participants reached back to the 17th and 18th centuries for their attire. Almost everyone wore a mask, maintaining the mystery factor. There were three levels of dancing and performances by students. Fountains of chocolate flowed all night. A “social media wall” projected photos and tweets using the hashtag #HarvardMask.

There were greeters at the entrance, along with trumpet players and human statues.  An a capella group greeted guests by the third-floor elevator. The student group Mariachi Veritas performed, as did bands, DJs, and pianists, along with tango, hip-hop, and Middle Eastern dancers. There were more than 70 student performers in all.

Sarah Surrain and Emiliana Rodriguez, students at the Graduate School of Education, performed flamenco at the event, and said they greatly enjoyed it.

Plarent Aleksi, a visiting fellow in philosophy at the Graduate School of Arts and Sciences, wore a spectacular costume reflecting the 18th century. “It was an illuminating period when philosophers were enlightened by reason, and they changed the world,” he explained. “It’s my first time at a masquerade ball, and I thought it’d be a great place to have fun and meet new people and to see that One Harvard works.”

Artist Robert Scott Lindsey painted to electronic music, creating a mural of the U.S. presidents who went to Harvard.

Anda E. Greeney, an Extension School student, won a ticket to the ball by putting a positive post about the event on Facebook. “I’m excited to be here because the Extension School started it. It’s a good thing we are one University.”

“This is amazing,” said Harding. “Outstanding performance after performance, multiple stages and levels running perfectly. It’s a lot of preplanning to do this,” he said, recognizing the 75 students who put it together.

“The atmosphere is energizing, and to see everyone dressed up and into the theme,” is fantastic, McKillen added.