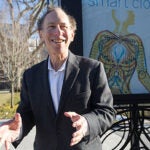 A lab focused on healing

When a car gets regular oil changes and care from a good mechanic, keeping it running for 10 years or more isn’t exactly an impressive feat of engineering. But then again, such a car isn’t an average 140,000,000 miles away.

For the engineers behind the Mars rover Opportunity, however, the last decade has been a testament to their hard work.

Originally scheduled to operate on the Red Planet’s surface for 90 Martian days, the rover now has logged more than 3,500 days, traveled nearly 39 kilometers, and collected a trove of data that scientists such as Andrew Knoll, the Fisher Professor of Natural History and Professor of Earth and Planetary Sciences, have used to study the planet’s early history, particularly any evidence of past water.

“I think it’s been one of the great space missions of all time,” Knoll said in an interview. “It’s really a tribute to good engineering. If you had told me, in the year 2000, that I would spend a significant part of my time over the next decade doing work on Mars, I would have thought that was crazy. But that’s the way it turned out.

Even a decade into its mission, Knoll said, the rover continues to send back data that leads to discoveries.

In a paper recently published in the journal Science, researchers detailed new evidence that Mars was once home to water bodies whose combination of persistence, moderate salinity, and near-neutral pH might have made them capable of supporting life. The new paper is also noteworthy, Knoll said, because researchers were able to use images from CRISM — the Compact Reconnaissance Imaging Spectrometer for Mars, an instrument orbiting the planet — to direct the rover toward areas they believed had once held water.

“Because the spatial resolution with modern orbiters is so high — we can now make meter-scale observations — we were able to use images and remotely sensed chemical signatures as a map,” Knoll said. “That is, we were able to make predictions about where we would find various clay-mineral-bearing beds, and that map was accurate enough to direct the rover to those locations.”

Data collected from those sites, Knoll said, said that liquid water was common on Mars’ surface during the first billion of the planet’s 4.5 billion years.  Since, then, however, the surface has been largely arid.

“There’s no question that early in the history of Mars water interacted with volcanic rocks in a way that produced mineral-alteration products,” he said. “But that doesn’t mean Mars ever looked like Earth. There may never have been a time in Mars’ history that, if you looked at it from a distance, you would see a pale blue dot.”

While Opportunity, along with its sister Spirit and other rovers, played an instrumental role in uncovering evidence for water on Mars, Knoll said large questions remain unanswered.

“The big question is how wet was early Mars, and how persistent was the water?” he said. “Those are very important questions with regards to habitability, because if you have water in one location for a period, and it disappears, and then you have water in another location for a period, and it disappears, that’s not a very interesting scenario for biology. But if you have water that persists for thousands, or even millions, of years, that’s another story. I think the jury is still out.”

While the rovers have added greatly to knowledge about Mars, the data they send from the surface has also given new insights into other planets, particularly Earth.

“There is a give and take between what we think we know about the early Earth and what we think we understand about early Mars,” Knoll said. “When you think about how planets develop, their tectonic systems, atmospheres, and all the aspects of a planet we can observe on Earth, we get important insights by looking at a very different situation on another planet.”