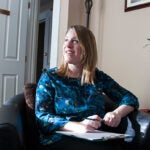 Surviving Valentine’s Day after a breakup

Relationships, and their complexity, take spotlight on Valentine’s Day

In the words of Canadian songster Bryan Adams, love “cuts like a knife, but it feels so right.”

And whether it’s the pursuit of it, the loss of it, or the yearning for it, there’s never a more polarizing and pressurized day to celebrate — and scrutinize — your love life than Feb. 14.

Cansu Colakoglu ’16 isn’t part of a couple, but she’s not sweating it. She’s been busy prepping for Valentine’s Day with her Singles Awareness party to be held the same night. “Boys are boys — kind of immature,” she said of the local dating scene. “They’re more interested in the other parts of dating, but not really dating itself.”

Her friend Aleja Jimenez-Jaramillo ’16 will probably be in attendance. But Jimenez-Jaramillo sees coupledom as a bit of a hindrance. “There’s a social element to being single that’s not there when you’re dating,” he said. “At mixers and stuff, if you’re not eligible, you’re almost of a lesser value.”

Being of a lesser social value is just one of love’s many tricks. And it’s no secret that love can make us think and act irrationally, bring out our neuroses, give us depression, or, conversely, sweep us away with giddiness.

According to Edison Miyawaki, an assistant professor of neurology at Harvard Medical School (HMS), “A lot of brain function in love and lust seems to pause.”

“Large areas of the brain — parts involved, for example, in planning or problem-solving — aren’t uniquely engaged; in fact, they’re deactivated,” he explained. “I don’t want to give the impression that love or lust is like a coma, but it’s interesting that you learn a lot about brains by what turns off.”

That can be oddly comforting, especially for anyone who’s ever asked him- or herself “What was I thinking?” after some awkward or embarrassing behavior in front of their beloved. So, excuse yourself, because you probably weren’t thinking.

Falling in love often means throwing caution to the wind, but the odd flip side is that developing relationships requires thought and effort, said Shiri Cohen, a couples therapist and an instructor in psychology at HMS. “Who’s paying for stuff can be a big issue,” Cohen said, “as well as who’s pulling their weight with tending to the relationship.”

Cohen helps couples sort through the lows of their relationships: sex/romance or lack thereof, commitment issues, and imbalances between life and love.

“Relationships are always a balance between your individual self and your relationship self and everyone defines that differently, and oftentimes partners aren’t on the same page,” said Cohen. “But by far the most common complaint walking in the door is poor communication, which is a catchall for a lot of things. But in my experience that’s code for ‘we’re just not connecting,’ or an underlying desire for more emotional intimacy.”

For Marissa Angell and Ian Brennick, students at the Graduate School of Design (GSD), connecting has never been a problem.

“There was a pole-dancing demonstration,” Angell started to say before Brennick chimed in with, “We bonded over our immature sense of humor.”

Their GSD friends describe them as “disgustingly in love.”

The two insist they never get sick of each other and never even fight. “He’s the least annoying person I know,” said Angell. Her parents have been married for almost 30 years, so she believes that sustained, romantic love is totally possible.

“My dad still does cute things for my mom, like practical jokes, buy her flowers, or go to costume parties where she dresses like Lady Godiva and he dresses like a strawberry,” she said.

The bar is high, but Brennick is excited to treat Angell for Valentine’s Day. What, exactly, she’s in for is anyone’s guess. “I’ve always tried to do something a little bit different,” said Brennick. “I’ve been planning. I took some time over Christmas break. I have some things in the works.”

Not everyone is as lucky as Brennick and Angell, and if you’re lonesome this Valentine’s Day, Cohen can empathize.

“I have this strong feeling that on Valentine’s Day people should rebel against it — go out with good friends or do something really self-indulgent,” she said. “I think the concept of Valentine’s Day is very commercialized and a set-up for people who both are and aren’t in relationships. It’s this built-up thing that sets these crazy expectations that oftentimes creates conflict when they’re not met. And if you’re not in a relationship, you can’t even find a restaurant to go to!”

If you’re looking for love, Cohen advocates online dating, though be warned: “People are not always honest about how they present themselves,” she said. “How they describe themselves or what they’re looking for is usually the version of themselves they want to be, or the partner they think they want. You’re only as good as how well you know yourself.”

After establishing a connection, it’s always good to meet in person, she suggests, though something low-pressure is best — just drinks, or a simple activity, like going for a walk.

Or, you could be more laissez-faire, as Colakoglu is. “I don’t think love is something you look for,” she said. “I always find it when I don’t look.”