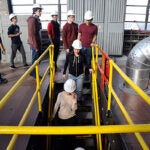 The first major winter storm hit the area in early December, but the bitter temperatures and slippery pavements didn’t deter a group from the Harvard and Cambridge communities from their regular meeting.

Despite biting sleet that turned several of inches of snow into icy slush, the Rev. Jedediah Mannis and a handful of attendees and volunteers trekked to the Porter Square MBTA stop on a Sunday morning for their weekly prayer ritual there.

Two volunteers wheeled a small metal table into a corner of the subway station and transformed it into an impromptu altar, covering it with a poster painted with a white cross and the words “The Outdoor Church.” On the table, they placed a plate of communion wafers. A small glass pitcher of apple juice filled in for the communion wine.

The group formed a semicircle around the makeshift dais as commuters hurried by, oblivious to the solemn ceremony. “We really hate to be inside, but there’s really no helping it today,” said Mannis, a clerical collar peeking out from under his heavy, red winter coat.

Since 2003, Mannis and community members from Harvard and Cambridge have met weekly for the Outdoor Church. The open-air services are free and open to anyone. The organizers say that they have missed only three services in the church’s 10 years because of bad weather. They celebrate outside in keeping with their founding philosophy.

“We try to stay out as much as we can for a variety of reasons,” said Mannis, noting that many attendees are homeless and uncomfortable in enclosed spaces. “It’s helpful for people to be able to decide if they want to be right in the middle of it or stay 30 feet away and have a cigarette, or stay 60 feet away. People find their own ways of participating in what we are doing, and that’s harder in a place that’s just a room with pews in it.”

Mannis, a practicing lawyer and an ordained United Church of Christ minister, started the church with the Rev. Patricia Zifcak, a graduate of Andover Newton Theological School, while he was at Harvard Divinity School (HDS). What began as a weekly Sunday service on the Cambridge Common has morphed into three services — two on Sunday, and a Thursday evening service at the Albany Street homeless shelter in Cambridge. There are also regular pastoral visits to nearby hospitals, prisons, and shelters. On Saturdays, as well as following their Sunday services, Mannis and volunteers canvass Cambridge, handing out sandwiches, juice, socks, and toiletries. In the colder months, they distribute gloves, scarves, and hats.

“It just continued to grow,” said Mannis of the church and its outreach work, which helps roughly 120 people each week. “We had decided early on that we didn’t want to go beyond the boundaries of Cambridge, but that we would try to grow by enriching the pastoral services that we were providing for our people. We just try to stay in touch with people wherever we are likely to find them.”

In addition to helping the homeless, the church serves as a training ground for students in HDS’s master’s of divinity program, many of whom are preparing for parish- and church-related ministries. As part of the master’s program, students are required to complete 350-400 hours of field experience, and many choose the Outdoor Church for fieldwork.

Students assisting the Outdoor Church begin to understand how to connect with people in ways that go beyond what a church can generally offer, and also figure out how to “live with the limits” of what they can do, said Emily Click, assistant dean for ministry studies and field education at HDS.

Through their internships, Click said, students learn that “you offer what you can,” and that you don’t always “get to make everything OK. That’s not what it’s about.”

Mannis and his volunteers try to help the homeless in any way they can. Through the years, he said, Harvard’s support in that effort has been invaluable.

“We typically have two or three interns from Harvard Divinity School and lots of people who make sandwiches for us or go around with us on Sunday afternoons who are members of the Harvard community. We are also supported by Memorial Church … Harvard has played a big role in all the work we do.”

It was Tiffany Savage’s first time at the Sunday service, which typically attracts upwards of 20 people, but the Cambridge resident said it wouldn’t be her last. A recovering drug addict, Savage heard about the service through a friend and decided to investigate, despite the bitter weather.

Each week the brief service begins with a reading from the Psalms and a series of prayers. In lieu of a sermon, attendees are encouraged to share their reflections on a reading from the Gospel. Savage offered her thoughts about a passage from Matthew.

“I believe for me God works through people. When someone says, ‘Why can’t I see him? I don’t believe in him’ … [I say] look in the mirror … it took me a long time to believe that.

“It’s only 15 minutes. It’s a great way to start a Sunday morning,” said Savage. “Weather never held me back from other things. I believe weather can’t hold me back from sharing the gifts that God has given me.”

Leonard Bentubo, who lives at the Heading Home shelter on School Street, has been a regular at the service for five years. Bentubo said it has become an important part of his life and helped him to deal with the pain of losing custody of his daughter as well as his apartment.

“It’s like a lifeline. If it ever left, I don’t know what I would do. … I got blessed by meeting people like Jed, and this gives my life meaning. This is the start of my week. I come here for my charge. It’s like plugging your phone in and getting charged for the week.”